Pigs and Pies in Westport - Cancelled!! 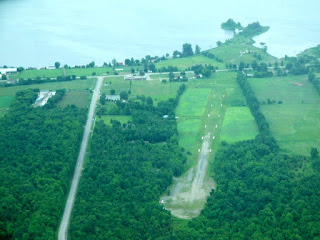 Planes from all over Ontario and Quebec generally fly in for the day if the weather is good. Last year we had 50+ different kinds of planes to see. The variety of planes is generally diverse, so a great opportunity to fly your own plane in and to talk with pilots of other makes and models. We have a fabulous spread of Octoberfest sausages (the Pigs) and locally baked pies (the Pies) available for a simple donation.

Love to see you and your members back at Westport on Saturday October 06, either as single plane but preferably as groups of planes from your own Club. For more information you can contact me at 613-276-6276 or Bill Green at (613) 273-5282. 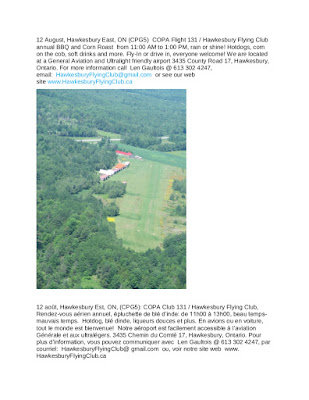 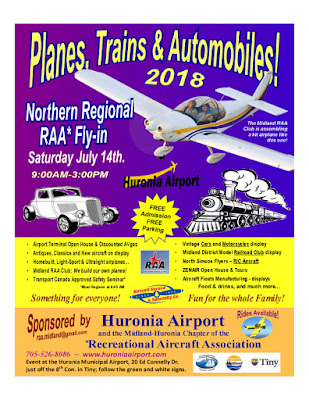 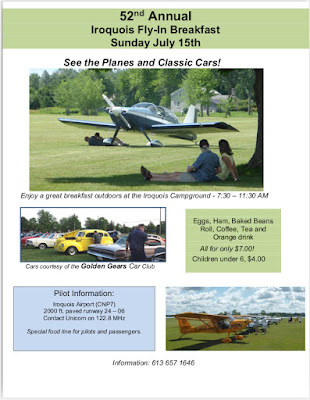 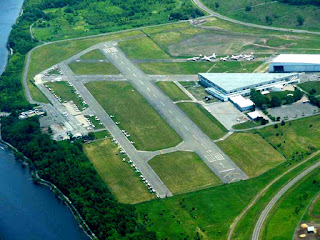 Every year, the RFC hosts Canada Day celebrations for those who drive-in, walk-in, bike-in, fly-in... even sail-in. Get ahead of this exciting day on Canada's 151st birthday by starting with a hearty breakfast (7-11am), visiting our open house pilot booths (in the morning), enjoying a sightseeing ride (museum side)... and much more besides. Pilots flying in with their aircraft get discounted avgas and the breakfast is on us! 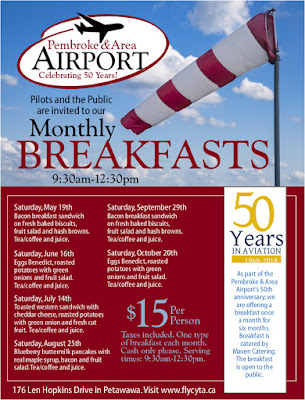 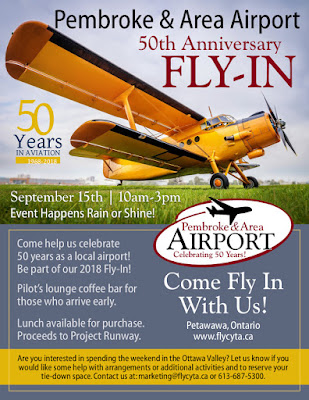 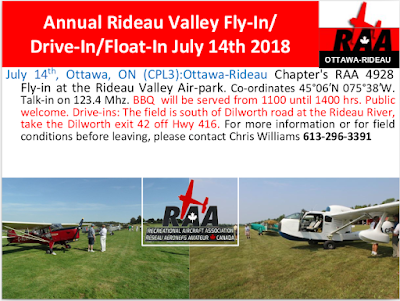 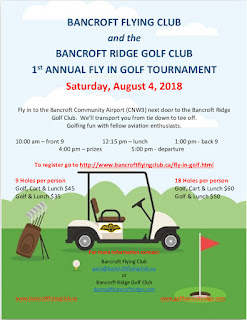 We are really excited about our collaboration with our next door neighbours, the Bancroft Ridge Golf Club and are pleased to announce that we are putting on our 1st Annual Fly In Golf Tournament on Saturday, 4 August 2018.

Participants can register themselves and their guests on our website.

There are no landing fees, lots of free parking and we have 100LL and JetA-1 available. We hope to see a lot of you here. 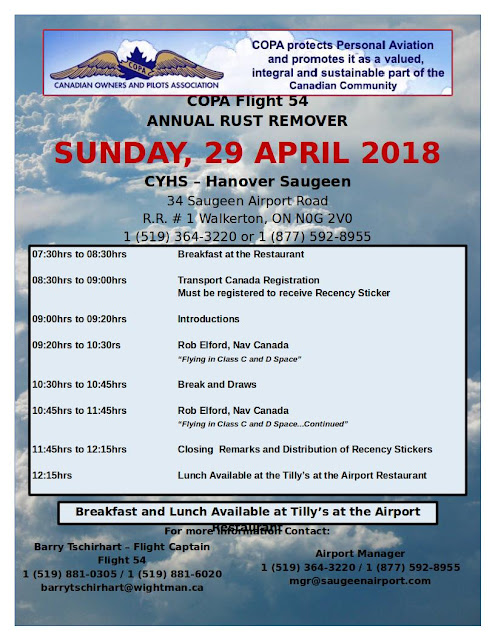 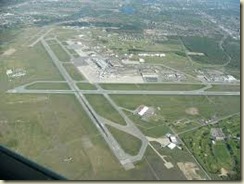 Posted by Michael Shaw at 14:33 No comments: 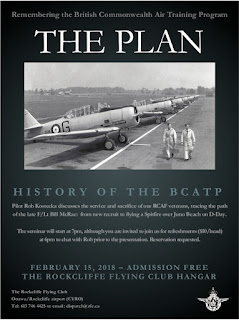 Robert Kostecka will be giving a presentation on the Bristish Commonwealth Air Training Program (BCATP) at the Rockcliffe Flying Club (RFC) on 15 February 2018 at 1900 hrs.

Complete details are on the poster at left.

To reserve a spot please contact RFC Dispatch or (613) 746-4425. Space is limited - so you will need to contact them soon to guarantee a spot. 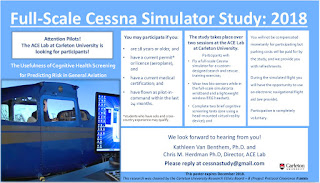 We have been busy here at the ACE Lab and are about to embark on a new Cessna 172 study. We have added a new feature where pilots will fly with ForeFlight on an iPad for part of the flight. As well, we will be adding a virtual reality-based cognitive health assessment tool that we designed. We are very excited about this study, as it is a big step forward in our plans.

The ACE Lab at Carleton University is looking for participants!

You may participate if you:

The study takes place over two sessions at the ACE Lab at Carleton University.

We look forward to hearing from you! 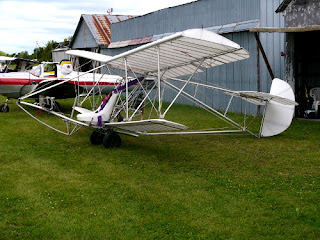 This is the best growth rate we have seen since 2014, but far off the peak growth pace in 2008, just before the recession hit, when the private fleet grew at a peak rate of 3.2%. As the accompanying graph shows, this is the first sign of a reversal from the drop in growth seen due to the 2008-10 recession. In all cases the numbers seem to reflect a cautiously growing Canadian economy, but the low dollar has also had some effects, as can be seen in the number of certified aircraft exported.

The US economy continued to do well in 2017 and its dollar remained fairly high against the Canadian dollar. With the Canadian dollar ending the year at 80 cents US, this resulted in a net flow of used certified aircraft out of Canada, mostly to US buyers.

The attraction of this category is undoubtedly low cost.

Amateur-builts were in the number two growth position in 2017, increasing by 35 aircraft, up from 28 aircraft in 2016, although down from an increase of 44 in 2015 and 67 in 2014. Interest in this category seems to be slowly trending downwards over time. In 2017 the aircraft added were made up of 37 airplanes, minus the loss of two helicopters and one gyroplane, with the addition of one amateur-built balloon. Airships and gliders saw no new net additions this past year.

Amateur-builts now number 4,243 in Canada and include a wide variety of aircraft, from fixed wing airplanes, helicopters, gliders, gyroplanes to balloons, airships and even one ornithopter, although the latter is in a museum.

Advanced ultralights were in fourth place for growth again in 2017, increasing their numbers by only six airplanes, well down from the 20 added in 2015. Their growth this year brought the total number of AULAs on the civil register to 1,241. By its category definition, all AULAs are powered, fixed wing aircraft.

The AULA category was introduced in 1991 and therefore 2017 was its 26th year in existence. The category has increased its numbers at an average of 48 aircraft per year since its inception and so can hardly be considered the success that was anticipated when it was started. As in recent years, the number of AULAs added in 2017 was well below the average from the category's earlier years. The low sales figures are mostly likely linked to the high price of new AULAs and their American counter-parts, Light-Sport Aircraft. US LSAs are also seeing very anemic sales numbers, far below the initial expectations in the US.

In round numbers, at the end of 2017 the private fleet made up 80% of the aircraft in Canada, with the commercial fleet at 19% and the state fleet at 1%, all basically unchanged in recent years.

Aside from a continuing loss of certified private aircraft exported mainly to the US, the private civil aircraft fleet saw a slight rebound after years of ever-slowing growth numbers, although most of the growth is in the lowest-cost end of the fleet. Whether this trend will continue over the next few years remains to be seen, as factors such as increasing aircraft ownership costs, lack of support among younger people for burning fossil fuel for recreational activities, low interest in aviation careers due to low wages and automation, and an aging private pilot population limit possible growth in the field.