Join COPA in Winnipeg on 20 June 2015, at our Annual General Meeting. A host of activities are planned in connection with the COPA business session. Friday evening there will be a barbeque meet and greet at Lyncrest Airport and participants will be able to take part in a progressive fly-out dinner on Saturday. Tours are being arranged to visit Nav Canada's Area Control Centre, CYAV Tower, Canadian Propeller, AeroRecip,the Western Canada Aviation Museum, the Museum for Human Rights and the Polar Bear Exhibit at the Winnipeg Zoo.

For more information and to register visit www.copawinnipeg2015.ca.

See you in Winnipeg! 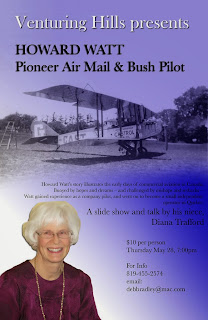 Uncle Howard flew in the Red Lake Gold Rush of 1926 in a Curtiss JN-4, then owned a Standard J-1 based in Toronto, flew a Ryan M-2 out of The Pas which he later bought, then flew mainly Fairchilds for Canadian Transcontinental and Canadian Airways on the Quebec North Shore mail service, and finally set up in the Lower St. Lawrence as an independent operator with 2 Fox Moths and later a Dragon.

The talk - very much a story telling approach - will last 45-50 minutes, probably with a break in the middle to allow people to talk to each other. I have about 100 slides and hope to show video clips as well so that people will get a feel for those early planes. Technical details for the planes I mention are given on the slides.

I'll be giving a 30-minute version of this talk at the 2015 convention of the Canadian Aviation Historical Society in Hamilton on 18 June 2015.

Crosswinds Café opens weekends for the summer at Huronia Airport

The Crosswinds Café is re-opening at Huronia Airport on 16 May 2015. It will be open on weekends in the summer.

The airport is also known as the home of Zenair, one of Canada's most prolific kit plane manufacturers. 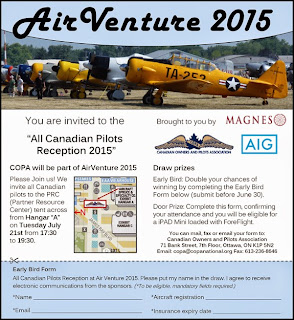 This is COPA's first official invitation to all Canadian Pilots at EAA AirVenture Oshkosh and is brought to you by AIG and the Magnes Group. Refreshing root beer floats will be offered to satisfy your thirst after your full day of gawking at aviation's finest and newest products.

Prizes will be raffled off with the grandpPrize of an iPAD Mini 64gb and a one year subscription to ForeFlight Canada going to one lucky winner.

Special guests are being invited and hopefully will come speak to our crowd of Canadian aviators. Don't miss out! Mark your calendar! Attend COPA's "All Canadian Pilots Reception 2015" (spouses and friends are also invited). 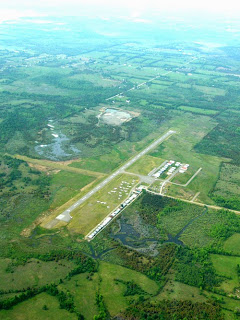 The club says, "hang around as long as you like and bring the whole family. Enjoy a great breakfast and look at lots of planes".