Canada eh! ForeFlight on my iPad 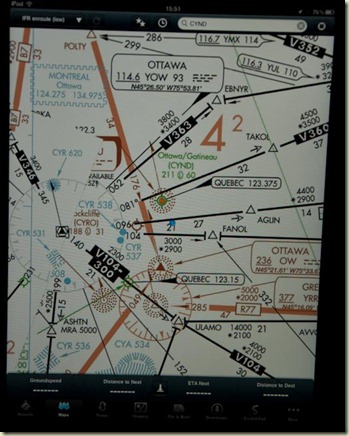 ForeFlight is nice software for the iPad. It even has some Canadian information.

You have several options for chart and airport information. The first option below is really US based and gives only coincidental Canadian information along the border. The second option adds dereferencing to approach plates in the USA, not sure if this is true in Canada. The third option adds Canadian IFR information such as departure, approach and arrival plates. As well as Canadain Low and High Enroute charts, but no IFR Terminal Charts. The last choice is the same as the number 1 but for three months.

I selected the 3rd choice above and was immediately billed 149.99 plus HST for a total of CAD$169.49.  I assumed the software is priced in US Dollars, but no, I was charged the same prices in Canadian Dollars at a loss of exchange of about 5%. Thanks Apple!

Canadian pilots that fly under the Instrument Flight Rules IFR  will get most of what they need. The weak link is for Canadian Visual Flight Rules guys like me. The Sectionals are just that FAA charts that happen to include parts of Canada along the border. This is not serious if you live in Southern Ontario, but even there it could mislead one into missing Mandatory Frequency (MFs) airports where one is obligated to use the radio. Also, some Class D Transponder areas could be missed such as around Ottawa. FAA Sectionals always warn pilots to use Canadian Charts and publications in Canadian airspace. There are no Canadian VFR Terminal Area Charts (VTAs).

Most Canadian aerodromes at there. I assume they are also in the US versions of the software. I believe the source is the US defense department data. The current update includes correct frequencies even for pretty small aerodromes, such as Embrun, CPR2. In past versions of the data, frequencies were missing for small airports  like Embrun.

I have not explored the whole package, but clearly the ForeFlight folks have done Canada well in this update.

I forgot a couple of things in my post on my iPad.

Mine is an iPad 1 64 gig, wifi only unit, hence it lacks the internal GPS the 3G models contain. I had to pay about 100 bucks for Bluetooth GPS to run navigation software. I bought the GNS 5870 Bluetooth GPS. It works great with the iPad but does suffer from a studpid touch sensitive off / on switch. I seem to have lost my touch.

My iPad works great even in bright sunlight although there are some annoying reflections. When I first used in an aircraft I could not tell if it was on or off. Stupid me, I was wearing polarized Fitover sunglasses. They would not allow me to see the iPad in portrait mode. I had to turn it to Landscape to see the screen. It's the same issue that leads to the suggestion that pilots not wear polarized sunglasses, you don't know what you might not be seeing.

Interestingly flying over Orleans it kept popping up with wifi networks from folks on the ground. We were at 1200 feet, doing about 120 knots. It often does the same when driving. The GPS works well with Navigon, a 50 dollar program for road navigation which works quite well and never says "recalculating".

Looks like there are some pitfalls to having charts on an iPad that pilots need to be aware of:

Apparently the iOS5, the latest operating system revision doesn't actually delete the information it moves it to iCloud to use its space for something else. What people are suggesting is to not update to version 5.

Still, I don't see how my wifi iPad can remove navigation info while flying, it is not connected to a wifi and the internet in most light planes. Maybe it could be a problem if you use it in the hotel's wifi to check email or something? I haven't upgraded my iPad to version 5 yet.

This type of problem is quite unlikely to be a concern with GPS units...