GPS failure – the need for data 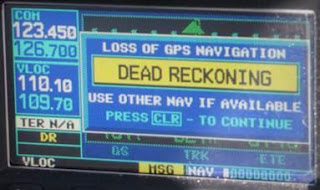 There can be no doubt that the introduction of GPS has been a game changer in the world of general aviation. In this article, we’ll look at the effect it has had, and is about to have on the General Aviation IFR Owner/Pilot.

The Air Traffic Control system has evolved over the years to the point that most pilots seldom use the so-called "Traditional Aids." A brief glance at the Canadian LO 6 en route chart (the one covering the Windsor to Quebec City corridor) will show the impact this has had on en route IFR navigation.

All the airways at the heart of this corridor have disappeared, and have been replaced with the so-called "Tango Routes," based on RNAV waypoints. Traditional navaids and airways are

being decommissioned at a fairly rapid pace. In the more remote areas of the country, many pilots would hesitate to fly without GPS, as the only alternative is NDB navigation, and flying NDB approaches is a dying art.

Many aircraft now flying in southern Canada no longer carry ADF, so are effectively excluded from IFR flight in areas where an ADF is the only practical backup. Nor do they carry DME, which is also required to fly just about all VOR approaches.

All this means that traditional navaids are becoming an anachronism, and the service provider, NavCanada, is quite rightly keen to decommission as many of these navaids as possible, particularly VORs, which are expensive to install and maintain.

Before we go too far down the decommissioning road, however, it is appropriate to ask the question "What happens if GPS fails?" The answer, in a nutshell, is "You revert to using Traditional Aids, or fly VFR." That then begs the question "How often is there likely to be a loss of GPS position information in IFR use, and how long will the outages last?" You would think the answer to these questions would be readily available, but this does not seem to be the case.

Transport Canada has had a "GPS Anomaly Report" form since 1997, but its existence is not well known. To date, it has only received 35 entries.

To get some kind of handle on pilots’ real world experience, COPA, in co-operation with AOPA, recently conducted an on-line survey. This evoked 513 responses over a period of a few days.

The author’s personal experience indicates that, if anything, the incidence of GPS failure events is increasing. In a recent two-week period, I flew on two occasions, and saw the dreaded "GPS Signal Loss" screen both times. The failures were at different locations, on different aircraft, and using different (Garmin) equipment. Both failures lasted a few minutes. On neither occasion was there a NOTAM relating to possible GPS failure.From a technical point of view, the GPS signal is susceptible to jamming, since it uses a single frequency, and is extremely weak. By the way, you can already buy jammers on the internet, the "best" of which is reported to have a ten-mile range. Truckers buy them, so the boss can’t monitor where they are!

So, how robust will the Traditional Aids backup system be? This will clearly depend on the frequency and duration of the loss of signal threat. If outages are very brief, they will have little effect on air navigation.

Longer outages (say of a few minutes or more) would force you to revert to Traditional Aids navigation, and it’s here that the architecture of the Traditional Aids backup system becomes a key concern. The COPA/AOPA survey indicated that there were a surprising number of such failures. Thus, it is of critical importance to have a statistically significant volume of data on GPS failures before the Traditional Aids structure is significantly reduced. COPA will recommend to Nav Canada that a web-based tool be added to the AWWS website to facilitate this, but in the meantime, please take the time to fill out and submit that "GPS Anomaly Report."

Note that the intent is to have one report per event, not one to cover the totality of your experience since you started using GPS. Make it very clear when the event was reported using IFR approved equipment, since only these events are directly relevant to IFR operations. In view of the suspected dynamic nature of GPS failures, it is recommended that you concentrate on data not more than a couple of years old. You should send the form to service@navcanada.ca.

Alan Hepburn: Has flown IFR for 43 years and flying GNSS IFR since 2002, flight instructor, and representing COPA in discussion on future IFR requirements.