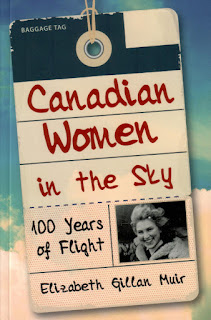 It is sad to think that here, in the 21st century, after more than 100 years of powered flight, that books promoting women in aviation are still needed. But the truth is that even today in Canada women make up only a very small proportion of pilots and very few young women see it as a viable career or past time. Author Elisabeth Gillan Muir seeks to tell the story of individual women in Canadian aviation and at the same time perhaps motivate and inspire a new generation with the fact that women really can fly.

Muir is no stranger to women's history. She has degrees from Queen's University, the Harvard Business School and McGill, where she earned her PhD. She also taught Canadian history at the University of Waterloo and the University of Toronto, too. She has tackled the history of Canadian women in several areas, including in Upper Canada.

Given her academic qualifications and background readers might be a bit wary that Canadian Women in the Sky would be an academic work, but that is not the case. No dry and extensive tome, Muir has intentionally written a simple and easily readable little volume, composed in language that teens can readily read and illustrated with many black and white photos, which adds to the interest factor.

Muir presents her look at women who fly by starting at the beginning, with a certain Mme Godard who was the first woman in the air over Canada, as a balloon passenger in 1856. Another aeronaut, Nellie Thurston, piloted her own balloons and parachute jumped from them as well, at 19th century fairs in Canada. With powered, heavier-than-air flight in the early 20th century, women soon became passengers, and later pilots, of these new "aeroplanes". Muir provides short biographies of women such as Dolena MacKay MacLeod, who was the first airplane passenger in Canada in September 1909, just seven months after the first airplane flight in the country. MacLeod flew with Casey Baldwin of the Aerial Experiment Association in his "Baddeck" biplane. Other early passengers included Grace Mackenzie and Olive Stark, who almost became Canada's first female aviation casualty.

Katherine Stinson, an American, was the first women known to pilot an airplane in Canada. Called "the flying schoolgirl", the petite Stinson flew at fairs and exhibitions all across Canada during the First World War. She did aerobatics and flew solo at night, by the light of flares. She also set records and carried the first airmail in western Canada.

Other chapters cover such fliers as Madge Graham who flew in the Curtiss H2SL flying boat, La Vigilance, which is now in the Canada Aviation and Space Museum in Ottawa. Pilots with short biographies include Eileen Vollick, Enid Norquay MacDonald, Louise Mitchell Jenkins, Marion Orr, Vera Dowling, Felicity McKendry and Dee Brasseur, who was one of the first women CF-18 pilots. Most of these women were career fliers, but there is a very short chapter on Canadian figure skating champion Barbara Ann Scott who flew for fun. Canada's first woman airline pilot, Rosella Bjornson also gets her own short chapter. Muir has a chapter on the Americans who were influences on Canadian women, too, including Harriet Quimby, Alys McKay Bryant and Amelia Earhart.

Muir tackles discrimination carefully throughout the book, but one chapter points out how women were discouraged from piloting and funneled into becoming stewardesses instead. She details the requirements and the challenges of that profession.

Other chapters cover women who have flown around the world, the group of Ninety-Nines who started the pollution patrol volunteer service Skywatch and the military pilot who flew with the Snowbirds and then went on to command the team, Maryse Carmichael.

The final chapter of the book deals with the two women who went further than any other Canadian women have done so far, Roberta Bondar and Julie Payette, Canada's two female astronauts who were crew on the Space Shuttle and later, in Payette's case, the ISS.

This is a lot of material to pack into 175 pages and so the stories told about each person are short and to the point. The book makes for fast-paced reading and, while it can easily be read by teens and adults, it might almost be ideal for bed-time stories read to a young aspiring aviator.

Dundurn Press's publishing program is supported by both the Canada Council for the Arts and the Ontario Arts Council.