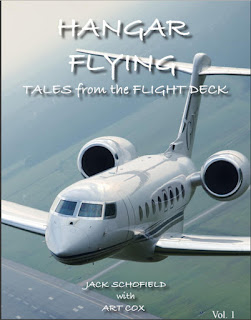 It is hard to argue with a professional-quality book of flying stories that is offered at this price - free! And perhaps best of all, this is the first of three volumes of books for free that author and publisher Jack Schofield has planned in conjunction with writer and illustrator Art Cox.

Both Schofield and Cox earned their aviation writing and artwork skills honestly, honed during years of lay-overs awaiting passengers in that "downtime" that all pilots find they have at points in many flight itineraries. These two are not writers who know a bit about flying, (but get the details wrong), these are both veteran pilots who learned to write about aviation, as well as draw and paint airplanes, too.

So what's with "free"? Schofield relates that it is so hard for aviation writers to get published these days by traditional book publishers, that he started his own publishing house, Coast Dog Press. Upping the ante, he publishes or distributes not only his own works, but books by other aviation writers, too. The Hangar Flying - Tales From the Flight Deck, series is intended to be a showcase for the talents of the writers in his stable, as he includes writers like Bill Grenier and Peter Barratt in this book. As a platform the book also includes one small advertisement for some of the other titles he sells. He hopes that volume two will have a bit more advertising, at least to help cover costs. It seems like a good formula that works for all concerned, especially readers, who get a free book and will likely get two more volumes of free books in the near future. As a COPA member, all you have to do is send Schofield an email and he will send you the link for the book. He will also send you a note when the future volumes are posted. It is hard to beat that kind of service, all for free!

So what do you get for the price? The book Hangar Flying - Tales From the Flight Deck, is 84 pages. It took me just over an hour to read it, so it is not a long book.

The chapters are short tales, each a good aviation story that the authors thought should be recorded for posterity. Some are amusing and some are thought-provoking, but there is something to be learned from each one.

There are also several extra anecdotes thrown in, in between chapters, including a few subtle smirks that some people might miss, like a little half-page story about General Romeo Dallaire that has a photo of someone else to illustrate it.

Speaking of illustrations, aside from the photos, the book includes Schofield's art, sketches and pointillism drawings as well as Cox's paintings, which add up to give the book a rich, custom feel.

I enjoyed the book, it is great fun and will probably make most pilots recall similar stories from their own hangars. I would normally say something like, "this book would make a nice addition to any pilot's book shelf", but this book is web-based, so it will only find a home on your coffee table and then only as long as that is where you keep your laptop or tablet.