Book Review: From Miles to Millions 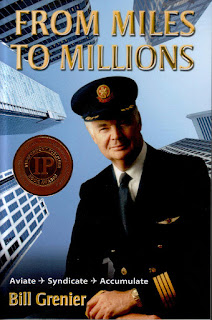 In his defence, Grenier signed up lots of professional help in the editing, proofreading and layout of the book and the final product is on par with any that you would find from the commercial publishers of Canada.

Even though it is a self-published autobiography there is no need to accuse the author of arrogance, as, at many points in the book he humbly addresses that. For instance, on page 274 he says, "it's not exactly a chip on my shoulder - at times it is more like a block of wood." But given the era of the story (1936-87) and his childhood experiences, the reader really wants to forgive him any shortcomings in that regard. If he had been reticent he couldn't have done the things he accomplished in life in that period of history.

Also worth noting is that the book is for a good cause. His website says, "net proceeds from the sale of From Miles to Millions by Bill Grenier will be donated to aviation student scholarships.The author has sent the first installment of $2000 to the Canadian Owners and Pilots Association who will add it to the Neil Armstrong scholarship fund for the express purpose of assisting aviation students in their quest for advanced training in flying skills." Now that is hard to take umbrage with! It is a book about aviation that will lead to future flying for some worthy young people.

This is the story of a person who learned to fly, worked his way though the dues-paying flying years making little money and then broke into corporate aviation and finally a job with Air Canada. He worked his way up in that famous company, too, becoming a 747 captain in that plane's early days with the airline. He started a housing development to provide his family with a place to live and ended up spending his off days in the real estate business, gradually building up what became a large property development empire, Pagebrook. He took early retirement from Air Canada at age 50 in 1985 and dedicated himself to the real estate business full time. He covered many miles flying, but in the end made more dollars in real estate than miles flown, as he concludes in the book.

The book starts with a chapter detailing a dramatic pilot incapacitation incident combined with a non-retracted main gear on a fully-loaded Boeing 747 taking off from London and bound across the Atlantic for Canada. Grenier was first officer on that flight and managed to get the captain and the rest of the aircraft and crew home all in one piece. He offers this up as some of the most challenging flying that can be found on airline heavy iron and the chapter is a very engaging start to the book.

The second chapter goes back in time to the author's days trying to scratch out a living flying in Florida in the early 1960s, when he ended up doing light airplane repossessions. He recounts many lessons he learned there in the deep south in that rather rough game. He goes on next to detail the day he was asked by a bank to take over and fix a large real estate development company, Mascan, that had fallen in arrears. Similar to the 747 incident in the first chapter, Grenier describes how he used the same sort of flying skills to tackle that job.

The author waits until the fourth chapter to go over his childhood and it was a rough one, full of conflict, violence and too much abuse and neglect for a small child. It isn't hard to see where Grenier developed his approach to life, his drive to succeed and his "street smarts". The chapter fits in well with the rest of his story.

Having owned many personal aircraft, the author dedicates one whole chapter to the clapped-out Funk B85C he and a friend bought as a time builder early in their aviation careers. You can feel his affection for the odd-ball and much-maligned plane shine through. Eventually he owned and restored another Funk B many years later, one that was later often flown by his youngest son and one-time COPA Board Member, Glenn Grenier. Today the younger Grenier is COPA's legal counsel.

Other chapters give accounts his flying on the DEW line construction in DC-3s and Avro Yorks, his early days getting hired by and then laid-off by Trans Canada Airlines, which left him having to move to the US to feed his young family and led to the airplane repo job. His big break was being hired by General Electric for their corporate aviation department, a place he worked and honed his flying skills on aircraft like the Convair 440 and Grumman Gulfstream I. Finally he was recalled to Trans Canada, now Air Canada, and flew Viscounts, Vanguards, DC-8s and ultimately the 747 there. It was during this time that he got into real estate development in Toronto and he relates many of the lessons learned in that business as well.

The book is approximately half aviation and half business stories, but it is a very worthwhile work for anyone interested in either field of endeavour. This is not a thin book, but it moves along at a good clip and never gets bogged down in the minutia of the business world that would lose the attention of aviation readers. Right until the end of the story the book remains engaging and genuinely hard to put down. It is a good read, would make an excellent gift, and would be a splendid addition to anyone's aviation bookshelf.

The book won a bronze medal from the American Independent Book Publishers.