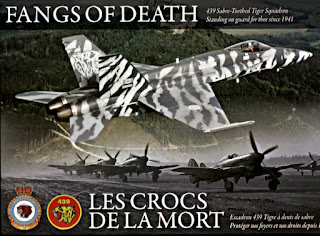 Marc-André Valiquette is most well-known for his extensive series of five books on the Avro Arrow, but lately he has branched out into Canadian military squadron histories, most recently tackling 425 "Alouette" Squadron.

With a title like "Fangs of Death" the casual reader glancing at the book might think this is a horror story, but the title comes from the post-war motto of 439 "Sabre-Toothed Tiger" Squadron, the unit that is the subject of the book. A large-format and hefty (4 lb, 1.8 kg) hard-cover book, Fangs of Death is largely a photo album of carefully collected squadron photos from the Second World War right through to 2013, with text and captions describing the history. The book is bilingual, with each leaf written in English on the left page and French on the right. The title in French is "Les Crocs de la Mort". With the large numbers of photos, drawing and paintings, plus the bilingual format, the book is a relatively quick read, as most people will only read it in one of its two languages. Vaiquette shares credit for the book with historical and photographic researcher Richard Girouard.

The book starts with 439 Squadron's origins as the School of Army Co-operation and later 123 Army Co-operation Training Squadron, flying Grumman Goblin biplanes and Westland Lysanders from RCAF Station Rockcliffe in Ottawa. Converting to Hurricanes and moving to Debert, Nova Scotia, the unit languished far away from the fighting until ordered overseas in 1943. Once in the UK, the squadron traded their aging Hurricanes for brand new Hawker Typhoons and started operations on 2 March 1944 in the ground attack role. Prior to D-Day they engaged in attacks on targets such as the V-1 "flying bomb" launching sites and conducted anti-shipping missions. During the June 1944 invasion of Normandy the unit took on German coastal batteries and performed attacks on road and rail targets ahead of the allied ground forces, including interdicting German armour. Throughout the latter part of 1944 the squadron took part in the fighting in France, Belgium and into Germany, including taking part in the Battle of the Bulge. In early 1945 they joined the battle for Holland. Not all targets were on the ground, as unit pilots downed two Me-262 jets, among other German aircraft.

439 became the first RCAF squadron to operate from a German base, with its move to Goch in March 1945. With the war in Europe over in May 1945 the squadron had 86 pilots who served with it in total, of which 20 finished their tours, 24 were killed or presumed dead on operations, plus five killed in accidents, eight were POWs and three escaped after being shot down.

The squadron was reformed on Sabre Mk IIs at RCAF Uplands, again in Ottawa, in 1951 as part of Canada's NATO commitment. They became the first unit to fly their Sabres over to Europe, rather than having them shipped, as part of Operation Leapfrog I. They flew from Ottawa to Bagotville, Quebec; Goose Bay, Labrador; Bluie West in Greenland; Keflavik, Iceland; Kinloss, Scotland and onto North Luffenham, England where they were initially based. Four years later the unit moved to its operational base at Marville, France, the new home of No. 1 Fighter Wing. The unit later upgraded to Sabre Mk 5s and finally 6s, holding quick-reaction intercept stand-by and training at weapons meets, NATO exercises, Tiger Meets and other opportunities to hone their skills. The Tiger Meets were NATO gatherings of squadrons that had tigers as emblems.

It was in this post-war period that the squadron got their sabre-toothed tiger badge and the deadly-sounding motto to go with it. In 1961 the Maharajah of Rewa in India donated a stuffed tiger, which became their mascot, Fang. 439 became the last Sabre RCAF squadron in Europe, prior to its conversion to the CF-104 Starfighter in 1964.

In 1966 France ended its military involvement in NATO and 439 moved to Lahr in Germany. It was in 1969 that the squadron first painted a CF-104 in overall tiger stripes to take to the Tiger Meet. In 1970 all CF-104 flying was moved to CFB Baden-Soellingen and, in 1973, 439 received its squadron colours from the Duke of Edinburgh. In 1984 the squadron flew its last CF-104 sortie and was disbanded, to be re-formed flying the CF-18 late the next year, still at Baden. The unit formed the "Desert Cats", along with 416 Squadron, as part of Canada's participation in the liberation of Kuwait in 1990-91. In January 1993 Canada ended its commitment to provide a fighter wing to NATO and 439 was disbanded, its CF-18s returned to Canada. The unit flew them home, across the Atlantic, with air-to-air refuelling.

On 1 April 1993 the squadron was reformed, by rebadging Base Flight Bagotville as 439 Combat Support Squadron, flying the Bell CH-118 Iroquois helicopter and the venerable T-33 two-seat jet in the rescue, transport and utility roles. In 1995 the unit re-equipped with three Bell CH-146 Griffon helicopters and in 2000 retired the T-33 jets. As well as covering base rescue operations, 439 also participated in the Saguenay flood operation of 1996, and the international response to the earthquake in Haiti in 2010, as well as deploying to Jamaica to cover SAR for the island in 2011 as the Jamaican Defence Force was shorthanded.

439 Combat Support Squadron continues today in Bagotville with its three Griffon helicopters in the rescue and transport roles.

The book, Fangs of Death, is well written, very readable with roughly a double page for each year the squadron has been in existence, with more coverage of the Second World War years, naturally, as those were busier times. The choice of photographs is outstanding and I am certain that it was hard to decide which ones to include, given the photographic riches available.

My only criticism of the book is not on what was included, but excluded. The book does seem to shy away from controversy and even though the unit picked up the nuclear strike and reconnaissance roles in 1964 with the phasing in of the CF-104 there is lots about the photo recce role, but not a word about the nuclear weapons that were very controversial at the time. Other historical sources mention the nuclear strike role for 439, but not this work. Similarly the CF-104 had a very high loss rate, with half the aircraft built lost in accidents, but not a single Starfighter crash is mentioned in the book, during almost twenty years of flying the type, which seems odd when reading it. Other works, like Larry Milberry's Sixty Years, delve into the high number of Starfighter losses in some detail. Not to pick on the CF-104, but of the Sabre years, 1951-63, only one accident is mentioned in the book and then it seems only because it was the squadron commanding officer, Squadron Leader CJ Clay, who was killed and only a month and a half after assuming command, too.

Other than these omissions this is a fascinating book, a photographic window into the world of wartime operations and peacetime flying in Europe with NATO and in Canada. It will surely appeal to any present and former squadron members as well as anyone interested in fine-grained twentieth century history and military aviation.

Valiquette notes that none of his books have received any financial support from any level of government and that he publishes them himself through his own publishing company, Imaviation. While his five volumes on the Avro Arrow and his 425 Squadron history are featured on his website, at the time of this writing, Fangs of Death is not yet on the website, although I expect it will be soon. It should also soon be available in museum bookshops and the other bookstores that stock aviation titles.