Stick A Fork In It - The Cessna 162 Skycatcher is Done 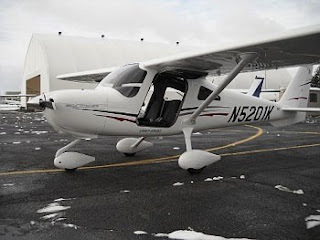 The news came this week that the Cessna will not sell any more model 162 Skycatchers. The 162's official webpage was taken down. The 80 unsold aircraft in inventory will be held for parts for the existing fleet, which currently stands at 275 aircraft. That tally includes the 80, meaning that there are 195 in the flying fleet.

After the most recent news the demise of the 162 was no surprise. In fact, for people who followed the story from the start, most will wonder how the aircraft stayed in production for as long as it did, from December 2009 to December 2013.

The 162 had a tortured development from the start. Its design phase saw the Rotax 912ULS engine that would have ensured a good payload replaced with the Continental O-200D, which put it over weight and gave it higher fuel consumption. The aircraft not only lacked full-fuel payload, but it lacked the ability to carry taller pilots and people who could easily get into a Cessna 150 couldn't fit in the diminutive 162 cockpit. The cockpit actually has room for the seats to be moved back, they just didn't do it, presumably for C of G reasons. There were two prototype crashes, both during spin testing that required design changes, some of the changes involved post-production modifications to the early production examples. Then there was the highly unpopular decision to have the aircraft built in China with final assembly in Kansas.

The initial price was supposed to be under US$100,000, but it quickly rose to its final mark of US$149,000. Cessna has not said, but my guess is, with all the trans-Pacific freight and two assembly lines to produce each aircraft, that they were still losing money on each one built. Why else quit making them? It is amazing that companies like Zenair can build and sell a comparable aircraft, the Zenair 650 LSA, for US$129,900 and presumably make money doing it. Big companies with tons of experience building and selling aircraft, like Cessna, should be able to do it more efficiently and for less. They had 1,200 orders for this plane, after all and that has to produce some economies of scale. Companies like Zenair are essentially building to order on an individual basis, but then perhaps "cottage industry" scale is the cheapest way to build small planes.

Then there was the much maligned choice of names, Skycatcher, sometimes written as "SkyCatcher". The choice of the marketing department, it did sound like it would fly formation with famous Cessna names like Skyhawk, Skylane and Skywagon, but it didn't. It started out snickeringly as "Skysnatcher" (or worse) and then, after the first two prototype accidents, as "Skycrasher". Perhaps they should have held a competition and let the buyers choose a name for it?

There were so many missteps in the short history of this little aircraft it is hard to believe that the development was carried out by the company that has produced more light aircraft than any other company in history.

Ironically I hope Cessna decides to sell the rights to the 162, because I think if the price was right that someone would actually buy it. I think with a bit of redesign work to lighten the airframe up, fit a lighter and more efficient engine, like the new Rotax 912 iS with its direct fuel injection and electronic engine management unit, which would allow carrying less fuel and more people for the same speed and range, as well as fix the ergonomics, you could have a real winner in a 162B model. Just name it something better, like "Sparrowhawk".