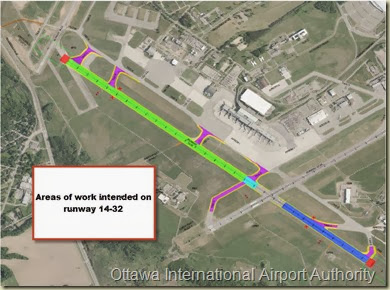 I represent private flyers on CYOW’s Noise Management Committee. The Committee was to have had a meeting today to summarize Noise complaints from 2013 and to outline how the resurfacing of runway 14-32 will impact noise this summer.

With only runways 07-25 and 04-22 active from May until September one would expect communities east or west of the airport to show some interest in how they might be impacted and what measures the Airport and flyers will take to mitigate potential noise on them. Well I am wrong! In fact, none of the community representatives indicated they wanted to attend the meeting and it was cancelled. (Only the airport authority, COPA Flight 8 and Nav Canada indicated they would attend the meeting.)

Surprisingly, Cessna as a type generate more complaints than most other airliners, military airplanes and helicopters. The airport reports they had 76 complaints in 2013. There were 24 complaints about Cessnas in 2013 versus 8 for B737, 5 for B767, 1 for Airbus. Most complaints come from the South-West (17), North- West (27) and North-East (21) of the airport. All Cessnas are grouped together so one does not know if we are talking about Citations or C150s, but I suspect the Cessnas  are predominately C150s and C172s used in flight training. As in the past it is light aircraft doing circuits and transiting to the practice area that stimulate many complaints. It is my understanding that the airport and the flight training operators have agreed to flight paths that mitigate noise complaints but it appears the pilots are not getting the message. Are we our own worst enemies?

It is expected that Runway 14-32 will be closed from mid-May to late-September. This will clearly concentrate aircraft movements on flight paths associated with runway 07-25 and potentially increase noise on its approach and departure paths, and on downwind and base legs over Manotick, Orleans and Barrhaven. Surprisingly these communities felt no need to attend the noise meeting. The Airport Authority is doing its best to be a good neighbour. One must wonder about how its neighbours are reacting?

The Airport Authority will advise local media and city politicians when the runway will close. When they resurfaced 07-25 in 2012 the change in flight patterns immediately stimulated more noise complaints. This seems likely this time too.

I am confident we Private flyers will do our part mitigate our noise impacts on our neighbours, friends and families.

Don’t hesitate to comment on any postings on this blog.