Planning Ahead For The 2014 Lancaster Airpark Fly-In 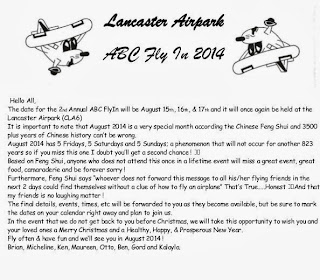 It is never too early to start planning for next year's fly-in season and Lancaster Airpark (CLA6), located just in between Cornwall, Ontario and Salaberry-de-Valleyfield Quebec is already planning for their 2014 ABC Fly-in!

In 2013 the Airpark ran its first ever "ABC Fly-in" focussing on Aeroncas, Champions and Bellancas and the event returns from 15-17 August 2014, so it is never to early to mark your calendars!

Organizer Brian Russell indicates that plans are yet to be completely finalized, but, as in 2013, if there is sufficient interest then provisions will be again made for floatplanes as well as wheeled aircraft.

As always all aircraft and visitors will be welcome. If you aren't flying an Aeronca, Champion or Bellanca then plan on coming to look at the ones that do fly-in.