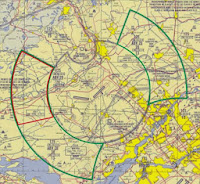 To allow for certification of the new CSeries aircraft, Bombardier Aerospace will carry out test flights within the Mirabel control zone, during which time some restrictions will be imposed in the control zone and the surrounding airspace at Mirabel airport.

Test flights will be carried out sporadically over spans of 1 to 3 days, during a 20-month period from November 2013 to May 2015. Restrictions during flight tests may affect Runways 06/24 and 11/29, the Mirabel control zone (excluding CYR 624), restricted area CYR601, and Class “E” transition areas located between 7 NM to 12 NM east and west of the Mirabel control zone (identified in green on sketch) and from 1,300 ft ASL to 2,000 ft ASL, depending on the type of test flight planned. A portion of uncontrolled airspace (Class G airspace), located west of the control zone and described below, will also be affected by restrictions