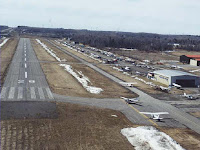 Mascouche Airport is once again under threat of closure in 2013, as explained in the recent post about the petition to save it. I thought a history of the airport would be useful to understanding the larger issues.

Mascouche Airport was built on land that had been set aside for highway construction. The land was not required for the highway in the end and the provincial government agreed to deed it to the municipality on the provision that it be used for public purposes. This is why the airport is located at the junction of Autoroutes 25 and 640 today.

Both the provincial and municipal governments of that day were keen on the idea of building an airport to attract businesses and visitors to Mascouche, bring jobs and provide a general aviation reliever airport for the Montreal area.

The airport was built in 1983 using a total of $1,400,000 in Transport Canada funds under community airport assistance programs in place then. The deals included a 20 year stipulation that it remain an airport from the point of the final $400,000 TC investment in 1991.

Richard Marcotte, the mayor of Mascouche at that time announced in 2002 that he wanted to close the airport, even though it was home to many aircraft, flight training and aircraft maintenance businesses and provided 75 direct jobs to the community. The municipality indicated that it wished to sell the land to a private company, Automobiles Delac Inc, to turn it into a car dealership.

COPA at that time identified this as an indication of the failure of the National Airports Policy that allowed local communities to close airports that were part of a national transportation network, without any regard for users outside their municipality. The association wrote to then Transport Minister David Collenette at the time, but he took no action to protect small airports.

In January 2010 COPA wrote to then Transport Minister John Baird reminding him of the 20 year commitment to keep the airport open and asking for his assistance to protect this important transportation infrastructure.

In 1983 and 1991, Transport Canada provided funding to the City of Mascouche to assist with airport infrastructure upgrades. This funding, which totalled $1.4 million, was granted under a community airport assistance program. In accepting this funding, the City committed to operating, administering and maintaining the airport for a period of 20 years following the signing of both agreements, the latter of which will end on September 26, 2011. After that date, the City of Mascouche will have met its obligations, and Transport Canada will have no authority in the City’s decisions pertaining to the airport.

By 2011 the municipality no longer wanted to turn the airport into a car dealership, but instead wanted to make it a housing development. The mayor indicated that it should be closed by July 2013, to avoid being an election issue in the fall 2013 municipal election.

As a result the municipality is currently engaged in a brief study of the value of the airport land for various uses and have indicated that they will consider retaining it as an airport if it can bring in as much revenue in taxes as other uses would. This criteria is a set-up to fail of course, because the airport is transportation infrastructure, like a highway or a sidewalk is. This narrow view fails to consider all the money that the airport brings into the community in terms of meals, hotel nights and other indirect revenue generated.

For its part the provincial government seems content with any use of the land as long as, if it is no longer public-use, that an equivalent parcel be set aside for public use, although not necessarily as an airport.

COPA wrote to Federal then Transport Minister Chuck Strahl, before the last federal election, asking him to review the National Airports Policy and he replied:

Local communities are the best placed to assess the importance of (airport) services and to seek support, starting locally, for their continuation.

Can Mascouche Airport be saved? It seems clear that the municipality wants it closed and has done so for ten years. Now that the financial and contractual obligations have been satisfied and the provincial and federal governments have walked away from protecting the airport there remains only public pressure to bring to bear on the municipality, which is why the APBQ has started a petition.

In the final assessment the municipality owns the airport and if they want to close it they can.

Note: This article was written using COPA background documents from 2002-2013.