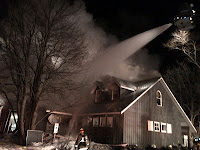 Early on the morning of 28 January 2013 the Ottawa Fire Department were called to fight a fire at the Cheshire Cat Pub and Restaurant and the corner of Carp Road and Richardson Side Road. Ottawa Fire Chief John deHooge described the fire as "stubborn".

Fire crews were on the scene early, but the lack of any fire hydrants nearby the very rural location, slowed fighting the blaze. At least 20 trucks, including tankers, with 50 firefighters attend the scene. The blaze was too hot to fight inside the building, forcing crews to work from the outside.

No one was in the building when the fire broke out and no injuries were reported.

The building was reportedly totally destroyed by the fire. The bell tower on the former rural school building collapsed after the fire had been burning for five hours.

The Cheshire Cat has been a favourite gathering spot for Carp Airport pilots over the years due to its close proximity to the airport and its status as the nearest and best place to eat in the area. Hopefully the pub owners will be able to rebuild their business, but it looks like Carp pilots will have to find a new pub for now!

Some more news on this story from CBC. It looks like the fire was probably electrical in nature. The good news is that the pub will be rebuilt!