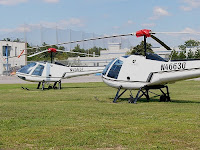 Enstrom Helicopter Corporation has recently been purchased by the Chongqing Helicopter Investment Co of the People's Republic of China, adding to the long list of US-based aerospace companies to be bought out.

In some ways Enstrom is a bit of a different case as it hasn't been US-owned in a decade. It was founded by Rudy Enstrom in 1959, but he sold a controlling interest to Purex Industries in 1968. After that it had a long list of owners, including F. Lee Bailey who bought control in January 1971, but he sold out in 1979 to a string of owners that included Remington shaver "I bought the company" entrepreneur Victor Kiam and later Segway designer Dean Kamen. In 2000 it was sold to anonymous Swiss interests, moving ownership out of the US. It was those same anonymous Swiss who this week sold it to the Chinese company.

Enstrom has had some lean years though the recession, cutting helicopter production and laying off staff. In 2010 they only shipped six helicopters. Things seem to be looking up lately, though, as the company has been selling helicopters in Asia and is expanding both its workforce and looking to build more plant space at its Menominee, Michigan location.

At this point in its history Chinese capital and expertise in Asian markets is probably a good thing for the company and will help it grow further. Of course, as usual, North American investment was not forthcoming, a story seen very often in the aerospace industry in recent years. As a result Enstrom Helicopter Corporation gets added to my growing list:

So I wonder who will be next?