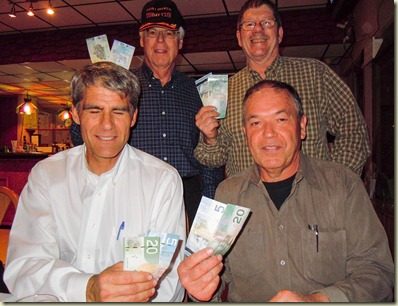 Front row, Dennis Pharaoh and Jean-Pierre Séguin, back row Bill Reed and Michael Shaw
Yep, that’s money! COPA Flight 8’s Curling Team were Runners Up in section B.
Wow, with Skip Bill Reed’s shot calling, lead Jean-Pierre Séguin’s skillfully placed guards, second Dennis Pharoah’s draw control and third Michael Shaw’s uncanny plan B shots we won every game and lead in points in the round robin. We only to lost the final in a tiebreaker against some pretty good curling female Torontonians. Nonetheless, we were in the money! This was likely due to our skillful manager Maria.
A really big thank you to Toronto Center controllers, specifically Brad and Brenda Hiscock for putting together another fantastic weekend in Niagara Falls curling with Cleveland  and Toronto Centre controllers. In addition they but on an amazing international boat race. It was great seeing all the curlers again including those amazing men and women from BrantAero, the “Blow Dryers” and the “Curling Irons.”
We thank all sponsors, including Best Western Fallsview, Jackson-Triggs Winery, Cleveland Centre controllers and Niagara Fall Curling Club.
The word in club house was that the team from Ottawa were all ringers, “once a year curlers just don’t make shots that good!” Well done Flight 8 Curlers!
Posted by Michael Shaw at 14:13