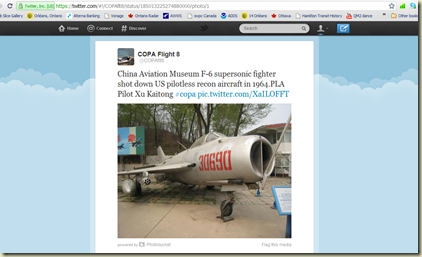 Twitter was launched in March 2006 as a micro-blogging platform. A What? I know, I know this sounds like so much techno jargon, but that is how it is described. Twitter has evolved into a significant marketing tool used by many to drive users to their websites, stores, whatever. Further, it is one of the fastest ways to get breaking news over a wide spectrum of topics. It is also a great venue to get interesting stories on almost any topic.

Twitter accounts start with the “@” symbol followed by some alphanumerics that are likely a word, e.g., @copaflt8. Most news organizations have twitter accounts and often tweet links to their stories, including CBC, CTV, CNN, NPR, etc. There are a number of Aviation organizations on twitter including, @eaaupdate, @chinaeaa, @AOPAonline@Aviation_daily, @aviationCanada, @aviationweek, @NTSBnews, @aviationsafety, @flyingmagazine@copaflt8, @buttonilfc, @copaflight10. As well, governments including cities to federal departments have twitter accounts.

Before getting into how one signs up for Twitter let’s look at a couple of tweets.

They look a bit like a METAR or TAF, but don’t let that put you off. Flight 10 is really asking you to click on the link to their website (you know, a link is that part starting with the http:// ...) to see some photos taken at Corman Air Park. Tweets tend to be abbreviated because one has to get one’s message out within 140 characters. The words with “#” marks in front of them are called hashtags or tags. These allow users to search for other tweets on the tagged topic.

Flight 8 is advising followers that they can see Gary Black demo a Cirrus SR22 at Carp Airport. Clicking on “#cirrus” will allow one to find other tweets talking about Cirrus. The tweets listed could include tweets about any use of “cirrus”, such as credit cards systems, high clouds, or Cirrus aircraft. The part starting “bit.ly” are links that have been shortened by BitLy.com because the original link would eat up too many of the 140 characters available to the author. There are two links provided in Flight 8’s tweet. The first is to Flight 8’s Blog (one of the most interesting aviation blogs on the Internet) and the second is to Carp Airport’s website. Unfortunately you have to click on them to see where they go. they are not clickable in this posting because they lack the http:// part in front of the bit.ly part.

That’s just two tweets, but you can see that one need not be a computer scientist to understand them. Also, both of these tweets encourage you to click on a link thereby driving you to a website or other location, like Carp airport.

So who would see these tweets? Well any twitter user that is “following” either of these two COPA Flights. As mentioned, Twitter accounts are identified by the “@” sign as in “@copaflight10” and “@copaflt8”. As well anyone who searched for the hashtags (e.g., #pilot, #flight) within Twitter or Google could also see these tweets. Hashtags are used in a similar fashion in other social media such as Diaspora. Almost any human activity has someone who has a twitter account and tweets on the activity. If you interested in photography, teaching, quilting, boating, golf, you name it, there will likely be a twitter user tweeting on that topic. For example, much of the world first heard about the earthquake and tsunami in Japan via twitter. Some hashtags can be quite short and their topic not particularly obvious. This approach is used to narrow the search to the specific topic and is a technique to help folks find tweets on particular topics.

One can also send direct messages to twitter account holders. For example COPA Flights 8 and 10 have communicated directly via twitter, “both lamenting that COPA National has not joined twitter.” As well we are followers of each other’s tweets. So the folks in Saskatoon (Flight 10) know about activities and news from the National Capital area (Flight 8), such as landing fee increases at Ottawa’s international airport. And Flight 8 folks know that Saskatoon has some great photos and flying activities. We were both surprised that there are only three Flights on twitter. Buttonville Flying Club, also a COPA flight (44) is on twitter but has made only one tweet and has few followers in addition to Flights 8 and 10.

To sign up for a Twitter account point your browser at Twitter.com and follow the links under “New to Twitter?” Sign Up. It is really painless. Keep in mind that Twitter is a commercial company and they want to sell you to others via advertising. That said, I have not found an increase in spam or malware after a few months on Twitter. Once signed up you can use twitter’s search feature to find people, organizations, companies, topics, etc. of interest to you. When you find one of interest, you can follow it passively. That’s right you don’t need to tweet you can do what most of us do and just lurk.

You can also tweet as often as you feel the urge. I don’t know if volume or quality attracts followers. Flight 8’s tweets on topics like the closing and re-opening of restaurant at Peterborough have been commented on in Brantford and Rockcliffe. As well, Flight 8 tweeted information about activities at Lindsay Airport that was intern retweeted to followers of Brantford Flying Club.

Ottawa International Airport commented on a Flight 8 tweet in which we were expressing the opinion that the airport seemed to have an unwritten goal of driving private aircraft off the airport. To some extent tweets need to be pithy, a little outrageous, funny, interesting, informative and perhaps controversial to attract attention. It is a new way of writing for most of us. In an effort to seek a wider audience I have been tweeting photos I took of aircraft in the China Aviation Museum. I tweet photos of planes that will be of interest to North Americans, such as those that claim to have shot down US or other aircraft in Korea or elsewhere. I had expected some comments but none have been forthcoming.

Twitter does have a downside. For example, politicians feel the urge to express political opinions. That’s fine, but twitter also makes it easy for hot heads, the spiteful, the impolite, the belligerent, the caustic to send comments back to the politicians. The NDP’s Charlie Angus quit twitter over these types of issues. You can read his opinion at http://www.huffingtonpost.ca/charlie-angus/quit-twitter_b_1394617.html?ref=canada. All I can say is, “Charley, if the kitchen is too hot...”

Flight 8 has not had any such comments and I believe it is more likely to happen to those emphasizing political, and perhaps religious, points of view. Some believe the 140 character limit encourages these types of comments, but I don’t buy that argument. I believe the larger problem for many is sending tweets without thinking about what one has said and how it will be interpreted. The advice to wait until tomorrow so you can re-read your “nasty reply” to an email, applies equally to twitter. As well jokes are easily misinterpreted and taken seriously or personally when this is the farthest thing from the writers mind.

The 140 character limit can be difficult to work within. Books have been written on this topic, my favourite is Microstyle: The Art of Writing Little, by Christopher Johnson.

Finally, Twitter is fun, informative and current. One does not have to tweet to get value from Twitter. That’s not to say there isn’t a lot of what I call “dead tweets”, ones that are dead ends and tell very little on a topic.

Thank you for your clear, concise and informative post! Request from COPA Flight 10 to republish your two social networking posts on our blog.

Tammy: I think that would be a good idea!

After reading the post, I suspect there may be a typographical error somewhere, Part 1 and Part 2 have subtly different titles.

Freudian slip, that spelling thing? No retitling was intended. I actually don't mind Twitter. Sure it's not perfect, but that just reflects the imperfect folks that use it. I guess the typo says as much as the article. Tony, Thanks for the comment.

I was working under the concept that Mike changed the title on purpose!

I see Flight 10 didn't waste any time reposting our articles!