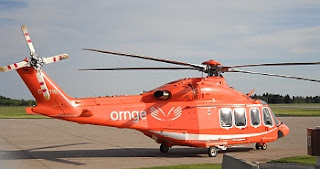 It's orange and it makes a very different sound than the S-76A that it replaced on 7 May 2011. Almost everyone in Ottawa has probably seen the new AgustaWestland AW139 that is now operating from the Ornge base at the Ottawa International Airport, since it is hard to miss.

The two crew, 15 passenger aircraft is used in the medical evacuation role by Ornge, the non-profit foundation that runs Ontario's air ambulance service. Their original aircraft were Sikorsky S-76s, at first on contract from Canadian Helicopters and later Ornge-leased. The new AW139s are bigger, faster and louder than the S-76s they replace and also have more range.

Originally an Agusta-Bell joint venture to produce a new Twin Huey-sized medium utility helicopter, the first 54 built were designated AB139s. Bell dropped out of the project and Agusta continued on its own. After merging with the UK company Westland to become AgustaWestland in July 2000, the later build aircraft were designated as the AW139.

Like the similar-sized Bell 212 Twin Huey, the 139 is powered by twin Pratt and Whitney Canada PT-6 powerplants. These are the PT6C-67C version, however and put out 1,531 hp per side, propelling the 14,110 lb gross weight aircraft to a maximum speed of 193 mph. The aircraft is fairly clean for a helicopter and features retractable nose-wheel-configuration landing gear that gives it that higher top speed, a useful asset in medevac flying.

The 139 has a fully-articulated five-bladed main rotor that gives it a very different sound compared the four-bladed S-76 it replaces. It is definitely louder than the S-76 in flight, although the sound is nothing like the sharp bark of the old two-bladed Twin Huey, it is more like a slowly building whir when approaching.

The AW139 has been very successful with a wide range of customers, from the Bulgarian border police to the Lebanese Army. The 139 is the right size for medevac as well as SAR, executive transport, off-shore oil rig support and military troop-transport use. In fact an enlarged derivative, the AW149, was announced at the Farnborough Air Show in 2006 and is being actively developed.

The 139 is built in Italy and also on a second production line at the AgustaWestland Aerospace plant in Philadelphia.

In Ornge service the 139 is being deployed to seven bases. For this mission Ornge is acquiring eight aircraft, leaving one spare, which will be located in Toronto when it isn't needed elsewhere. The Ottawa base was the third to receive their 139, after Sudbury and London. The aircraft at the Ottawa base covers eastern Ontario including Algonquin Park, from Mattawa in the north, to Hawkesbury in the east, Cornwall in the south and Kingston in the west.

The Ornge 139s have special-configuration medevac interiors that include attendant seats that can swivel and traverse, allowing the paramedics to work on patients with unstrapping. The swivelling stretcher installation, that includes a lift and lower mechanism, permits much easier loading and unloading of patients and reduces the potential for paramedic injuries.

The AW139s belonging to Ornge will be a familiar sight around Ottawa and indeed most of Ontario this summer. They are hard to miss with their bright orange paint schemes, with their distinctive sound.