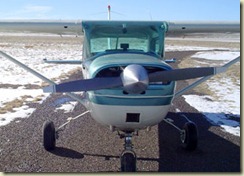 I attended Ottawa International Airport Authority’s Noise Management Committee meeting 7 June 2011. There is good noise news and bad. First the good news, Ottawa really does not have a noise problem. There was a increase in complaints from 55 in 2009 to 81 in 2010. At the same time there was a small increase in aircraft movements from 129,773 to 132,322. For every 1000 aircraft movements there are .61 complaints. I don’t have statistics for other airports but I am told that this is low in comparison with other major Canadian airports. As one would expect the majority of complaints come from residential areas, particularly for departures to the north that fly over the city off runway 32. Complaints generated by noisier aircraft like First Air’s now retired Boeing 727s have dropped. First Air replaced their B727s with Boeing 767s which are significantly quieter. Still military and noisier civil aircraft such as the older Boeing 737s generate some complaints. The airport is considering modifying its noise abatement procedures to limit the times of day when these noisier aircraft (Chapter 2) can operate. Such a change would be voluntary for Military activities.

The bad news is that many complaints are generated by light flight training aircraft operating on runway 04-22. Unfortunately the flight schools based at the airport chose not to attend the meeting. To mitigate this noise the Airport Authority is asking flight training and itinerant aircraft to turn crosswind after takeoff from runway 22 along Merivale Rd. I saw no reason why this could not be done to help mitigate noise. It would have been helpful if the based flight training operators had been at the meeting to comment on the proposal. My concern is that itinerant pilots likely would not know which road is Merivale Rd.

It was noted that there are a couple of repeat noise complainers, particularly about light aircraft. This is likely true at all airports. Nonetheless, if we can make safe small changes to our flight paths and practices to mitigate these complaints we should do so. 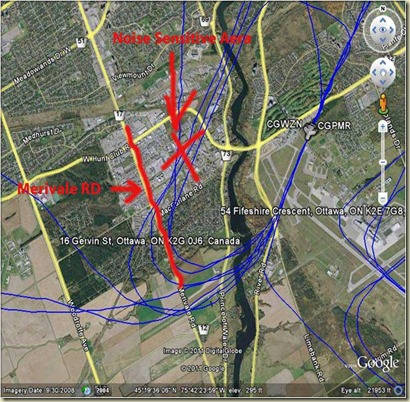 This figure shows current flight paths in blue along with the noise sensitive area in red. Following Merivale Rd. rather than over the noise sensitive area will not be difficult. Instructors can easily show student pilots the preferred routing to avoid noise complaints. This will move the downwind leg of the circuit farther from the airport and potentially increase risks if an engine failure occurs.

The other unusual complaint is generated by police aircraft. The Airport Authority obviously has no responsibility for this noise, although they do log the complaints. It was suggested that the police consider installing a quieter muffler system similar to those in use in Europe.

Interestingly there was also a discussion of the language used in Noise Abatement procedures, particularly, turbo-prop vs Turbo-jet. Apparently some more modern Turbo-fan aircraft do not believe the noise abatement semantics applies to them?

We light aircraft operators can do our part to mitigate aircraft noise that disturbs our neighbours. We certainly don’t want to see the Airport Authority give up on the north field and close it just because of noise we can control. Let’s do our part!

Just curious, Who was there first the airport or the housing addition?

The airport was there in the 1920s, long before there were any houses near there, but under Canadian law that doesn't matter as antecedent uses don't have priority.

Canadian law aside, I'm not sure good neighbours should play the "I was here first card."

That would seem to suggest that if your neighbour moved in before you, that he has the right to make noise, smells, pollute your well, whatever he pleases, and you have no recourse?

I think that is what is behind the basic principle! The main problem with it is that it means that people can move an incompatible use, like housing, next to an existing use, like an airport, rain line or garbage dump and then demand it be closed.

Agreed, unfortunately land use is within the control of cities under authority of Provinces. Most Canadian Cities have a dismal record of maintaining compatible land uses in the vicinity of airports. Ottawa is no exception.

Why is this the case? Well, at the same time Cities and Provinces keep being reminded that Regulating Aviation is a Federal responsibility...not theirs. (See recent Supreme Court decisions.) Over the the last 60, or so years Cities have ignored compatibility issues near major airports because the airports were mostly owned and operated by the federal government.

Airport owners, the Feds, took the noise complaints, not the city fathers! In the Early 1990s the feds moved to get out of Airport operations. Cities have to stop hiding behind phantom federal airport operators.

The aviation industry is always concerned that NIMBY influences will drive Municipalities to close airports rather than deal with compatibility issues. We felt more insulated from NIMBY influences if the feds were in control. But the feds never could deal with the compatibility of land uses near airports, excepting controlling safe approach and departure paths at a few airports under Airport Zoning Regulations. It's time the Provinces and Cities stopped hiding behind the feds on noise issues.

It is even worse than that! In some cases municipalities have tried to protect land by zoning around an airport, but property owners have successfully challenged the zoning in court, because zoning for an airport is federal jurisdiction!