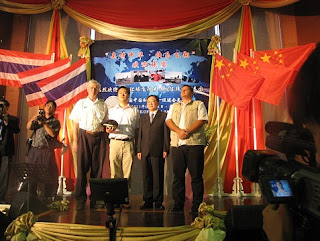 We arrived here in Laos after an uneventful 1 hour trip from Bangkok.

At Bangkok, there was a media extravaganza on arrival. Two busloads of fans to great the intrepid pilot, then a party in the evening with hundreds of guests, including a representative from the Chinese Embassy (see photo).

We saw the Grand Palace (really, a whole collection of palaces) yesterday morning, but I think some of the food at the party must have disagreed with me, so I took the rest of the day off, and had a small meal in the Italian restaurant (only customer) last night. Pretty well back to normal today, but now Wei has the bug, so it's not only round-eyes who are affected.

Our missing Jep charts finally caught up with us from Reykjavik (have been using my year old ones up to now). It took 1 1/2 hours to drive to the DHL service centre to pick them up, and we never left the city.

The handling bill at Bangkok was the highest so far ($3,500). After this, $1,500 a landing in Russia is going to look like a bargain. For any Scotsmen, the real challenge is to fly around the world and not pay a single handling fee. I doubt if that's possible, except in a real long range airplane, or maybe a balloon.