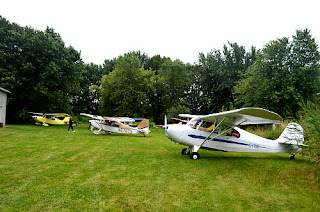 The weather for 15-17 August 2014 was anything but cooperative...I'm being very polite here. The Friday BBQ was attended by about 15-20 people.

Saturday dawned lousy again and the whole day we only had about 8 aircraft able to fly in. One from the Rochester NY area and the rest were local.

On Saturday we had seminars with CASARA and SmartPilot, both very informative and well received. It was very unfortunate that we didn't have more people.

Saturday lunch and chili dinner were appreciated and well attended considering. We had a few brave campers, some from Toronto actually set up a tent and camped outside. The other folks were less adventurous and pitched their sleeping bags on tables in the hanger. 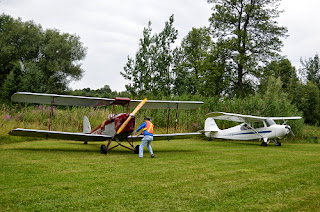 Sunday morning dawned a little better and we had a couple more airplanes drop in and join us for muffins & coffee. Almost all of our guests were on their way home before noon.

I can't say I'm at all pleased with the turnout but under the circumstances there was nothing else we could have done.

Lot's of food left over although some of it was still frozen so it will carry over for our Corn roast coming up on 01 September.

That's about the end of it I guess we'll try again next year. Everyone tells me the 3rd time is a charm so next year should be charming!!!!

By the way, the ABC site has switched over to lancasteraeroclub.ca