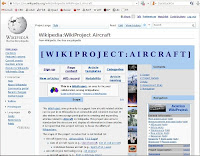 There are a lot of interesting things happening over on Wikipedia and at least one of them involves aircraft, or at least articles about aircraft.

One of the aspects of Wikipedia that casual readers don't see is that there are many organized WikiProjects, where a group of editors work together to create new articles and to make existing articles better within a related topic area. WikiProject Aircraft is one of those projects and it has some goals that will be of interest to any aviator. The project has 348 signed up members, of which a couple of dozen are really active these days, making it a relatively small group. Aside from working on articles about aircraft components, history, engines, aerodynamics and so on, the project members are also putting together articles on aircraft designs, by type.

That aspect started a few years ago when it was pointed out that we had about 10,000 aircraft type articles and it was suggested that we finish off the task, by writing articles on the rest of them. That was readily agreed to, but no one knows how many distinct aircraft types have ever been built. We discussed it and my best guess was about 25,000. That meant that we hadn't even got half way at that time.

So we set to work, with about a dozen of us dividing up the work by area of interest and access to references to work from. The main challenge at that time was that all the easy and well-known types had been done, like the Cessna 172 and the Boeing 747. It was the odd, rare and obscure types that needed completing and that called for editors with access to detailed, published works about rare aircraft.

Everyone has their own areas of interest and expertise. Some editors set to work filling in the one-of-a-kind pre-First World War pioneering types, others the experimental World War Two aircraft, while others specialized in 1950s French homebuilts or 1920s light aircraft. For my part I started work on ultralights, gliders, hang gliders, trikes and homebuilts, mostly because I have the references available and no one else was working on those aircraft.

In the last few years the project members have probably added another 6000-7000 type articles, listing them as they are written, for peer review on a special list page. As can be seen there, the articles that are being written are on fairly unusual types these days.

So the goal continues - to have an article on every aircraft type that has been flown, developed or was even just proposed by an established aircraft manufacturer.

How will we know when we are done? A good question. Probably when we can't find any more aircraft in any references to write about we might be close to done. Of course every year new aircraft designs are announced, developed and flown, so the work will never be totally complete.

As the project members get closer to the goal it makes Wikipedia more and more the first stop for information on different kinds of aircraft. Our hope is that it will become the best source of aviation information and, of course, it will always be available to everyone for free.