Red Bull Flugtag - Yes or No? 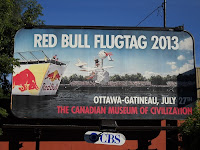 The event is, of course, sponsored by Austrian "energy drink" manufacturer, Red Bull. It consists of teams that create "aircraft" to be launched from a barge equipped with a runway, like an aircraft carrier, anchored near the Museum of Civilization in the Ottawa River. The aircraft are really "art projects" and aren't intended to fly away from the barge, but instead all just fall into the river. Teams are supposed to be judged on the basis of distance, creativity and showmanship, but not for anything relevant to aeronautics. Spectators laugh as each and every one is pushed down the runway and predictably plummets into the river, with its crew, to be rescued by the boats attending. None of them flew, all of them crashed. That's it. Nothing else.

Perhaps you need a Germanic sense of humour to find this amusing?

In 2008 about 100,000 Ottawa-Gatineau residents and tourists crowded the river on both sides, plus the Alexandria bridge to see this event. Naturally Red Bull got lots of exposure for the their products.

Other than being amazingly pointless, does this event do any harm? My opinion is that it hurts aviation. These "art projects" are supposed to look like small aircraft and there is some expectation that this is related to aviation in some way, which is why it is called a "Flugtag", and so 100,000 people now associate light aircraft with crashing instead of flying.

Needless to say I won't be attending this year's event.

CBC video report on the event