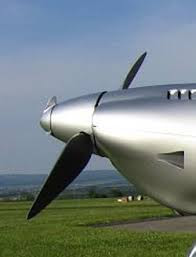 The VProp automatic variable pitch propeller was originally designed by Thomas Strieker and produced by Silent Aircraft GmbH of Verl, Germany, but has been unavailable since it went out of production in 2011.

Intended as a purpose-designed propeller for the Jabiru 2200 and 3300 engines, in its two and three-bladed version respectively, the rights to the design have now been passed to the well-established propeller manufacturer, Hoffmann Propeller GmbH & Co. KG of Rosenheim, Germany.

Hoffmann are not currently offering VProps for sale, but are engaged in further developing the design to make it available for a wider range of engines with a wider range of power outputs. Hoffmann Propeller Technical Engineering's Stefan Bichlmeyr is leading the development effort.

The innovative VProp design uses aluminium blades mated to an aluminium hub through vibration dampened ball-and-socket joints. The pitch of the blades is controlled automatically, without pilot input. The blades are kept at an optimal angle of incidence through a co-axially-mounted, counter-rotating vaned spinner mounted in front of the blades on the hub. The vanes drive an internal generator which measures the prop's rpm and the speed of the aircraft. An electronic control unit mounted inside the hub takes this information and compares it to optimal profiles set on the ground and then uses an electric motor-driven pitch change actuator to optimize the blade pitch for the aircraft's speed and engine rpm.

The VProp's pitch range is limited by mechanical stops and if electronic control is lost it mechanically reverts to a safe pitch angle automatically, as a fail-safe.

Because there are no cockpit control runs the VProp is entirely self-contained and internally powered, making it simple to install and maintain. In flight it reduces pilot workload over traditional constant speed propellers, as there is no pilot input required.

In the past the VProp has been available only for experimental installations, but Hoffmann hopes to eventually certify the design.

This article also appeared in the August 2013 edition of COPA Flight.