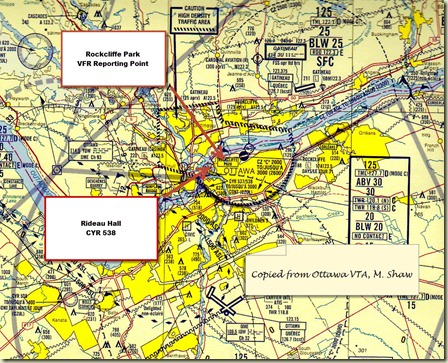 For sometime I have wondered why there is VFR reporting point 1 mile west of Rockcliffe Airport only half a mile from Restricted airspace (CYR 538). I had never heard any pilot or air traffic controller use it. As well, there had been in increase in aircraft entering CYR 538 over Rideau Hall. It seemed to me that the VFR Reporting point might potentially sucker pilots into violating the restricted air space. This topic came up at a TC safety seminar in Ottawa.

I wrote to Nav Canada’s Services folks and suggested they eliminate the reporting point. They checked with ATC, Gatineau FSS, local flight schools and concluded that my suggestion made sense. Below is there reply.

“A submission has been made to remove the check point from the Ottawa VTA and the VTPCs in the CFS and Water Aerodrome Supplement (WAS). This change should be reflected in new Ottawa VTA due in February 2013, the Jan 10, 2013 CFS and the next WAS due March 7, 2013.”

Thanks for listening Nav Canada!

Great work - it was totally a trap!