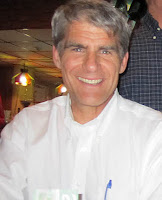 Longtime COPA Flight 8 member Dennis Pharoah, 49, died when the car he was driving collided with a tree on Cavan Street, between Raven Avenue and Larose Street. The collision happened shortly after 4 pm on Wednesday 24 October 2012. Ottawa Police indicated speed was a factor in the collision.

Pharoah was involved in aviation for most of his life, flying single and twin-engined airplanes for both recreation and professionally. He worked in aviation as well, as an Accident Investigation Technician for the Transportation Safety Board of Canada laboratory at the Ottawa International Airport, specializing in the analysis of Flight Data Recorders and Cockpit Voice Recorders.

Flight 8 members will always remember Pharoah for his insightful and penetrating questions directed at speakers at the flight's meetings and also for his habit of being the last flight member to arrive. When Dennis showed up the meeting could then begin, although sometimes Flight Captain Mike Shaw would jump the gun and start the meeting without Dennis.

Pharoah was also an avid curler, playing on the Flight 8 Curling Team. He played Second on the Flight 8 team that were runners up in section B of the 2012 ATC Bonspiel held in Niagara Falls in April 2012.

Dennis's presence as a member of Flight 8 will be greatly missed.