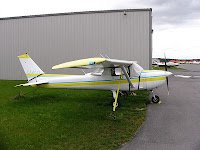 We recently discovered that Carp Airport has new flight school, which is just in the process of opening up. International Pilot Academy was quietly announced by the Carp Airport operator West Capital Developments as part of a news release about the Cirrus SR22 demonstration.

The Academy is located in the Carp main terminal building and has a website at www.intlpilotacademy.com. Jules Selwan is the school's President and Operations Manager and Christopher Keep is the Chief Flying Instructor and Person Responsible for Maintenance (PRM). They hold ground school at the Canada Aviation and Space Museum and use the Museum's Redbird simulator.

While their flying operations are based at Carp Airport, their administrative office is located at 1427 Ogilvie Road, Suite 102 in Ottawa, Ontario. They are in good company there, in the same building as Farm Boy's corporate headquarters.

Even though they go by the English name International Pilot Academy Transport Canada has them listed as Academie de Pilotage Internationale Inc and they advertise bilingual training.

Transport Canada also indicates that they are starting off with one aircraft, a 1976 model Cessna 150M, C-GPUY, but I imagine their fleet will grow from there over time. Presumably their multi-engine training will be done on a different aircraft.

Of note, C-GPUY is a familiar sight at Carp as it used to belong to the previous flight school based there, Carp Flying Academy, which operated between 21 January 2006 and 18 November 2008 and flew a pair of Diamond DA20-C1 Eclipses in addition to the 150.

Flight 8 welcomes International Pilot Academy to the Ottawa area - we hope they have a busy summer of flying!
Posted by Adam Hunt at 08:46

C-GPUY actually has a longer history with flight training at the Carp airport. It used to be owned and operated by Westair Aviation, a flying school based on the field in the mid 80's until the early 90's