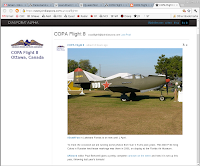 (Left: Flight 8's Diaspora page as seen by someone not signed in, just on the open internet)

COPA Flight 8 has been on Diaspora now for two months and so I thought this would be a good opportunity to describe how it is going and what I have learned about COPA Flights using social networking.

This article is part one, Flight 8 Captain Mike Shaw will be writing Part II about using Twitter in the near future. (Editor: Now found here)

My previous article on Diaspora described what it is and how it works. In brief it is a social networking service like Facebook, but lacks all of Facebook's drawbacks as it is community owned, run on free software and is a disbursed network, Diaspora has about 377,000 members right now many of whom are very active in social causes. In comparison Facebook has about 845 million members.

Unlike Facebook, where people you know in real life mostly post cat photos and write about what they had for lunch, on Diaspora people meet new users from around the world and mostly post about causes, ideas, politics and yes, cat photos as well. Without cats the internet would be a very different place. Diaspora has no advertising and is instead supported by donations and T-shirt sales. The users own Diaspora, unlike on Facebook where users are the product served up to advertisers.

Diaspora was designed from the start to give users total control of privacy, which is great for individuals, but less important for organizations that are just trying to get seen.

Diaspora does not have special accounts for organizations, as opposed to individuals. I just opened a normal account on www.joindiaspora.com and customized it as a club account. Click the photo above for a screenshot or on www.joindiaspora.com/u/copaflight8 to see what it looks like. One of the reasons that I chose the joindiaspora.com pod is that "public" posts there are truly public and anyone on the internet can see them, which is good for promoting a club like Flight 8. Not all Diaspora pods work that way and many keep even "public" posts visible only to signed in users.

So once I had the account up and running, the next question was "what to post?" I experimented with a few news items, videos and some photos, which all turned out well.

Like Twitter, Diaspora users can follow people or follow tags and so tags are the key to getting your items seen by a large number of people across the network. I quickly figured out that tags like #cessna150 have no followers, but that #aviation #flying and #aircraft have quite a number.

I posted some local aviation news items, like press releases about local airports and also embedded some flying videos from You Tube, but I think the best idea I had was posting whole series of photos. When COPA Flight 8 members Michael Dixon and Nathalie Huard sent in some ski flying pictures for use on the Flight 8 website I also decided to post them on Diaspora, one picture per day, with some good general tags. These started attracting comments, "follows" and even e-mail from Diaspora users interested in aircraft. For some reason most are from Germany and Italy.

By the time I ran out of ski flying photos Sun 'n Fun had started and I dug up some SNF photos from past years and started posting those. Finding an archive photo in my collection and making a well-tagged post takes about two minutes early each morning. The idea is to show bright and positive flying photos.

The Flight 8 Diaspora account is not getting much traffic from Flight 8 members as far as I can tell, but it is certainly getting international attention, which is a good thing overall. The Diaspora account is a complement to the website where we have more static information, meeting announcements and larger articles, this blog where we have shorter articles and the opportunity to add comments and the more immediate "newsfeed" approach of Twitter.

As with all social networks the key is having enough content to get and hold the attention of readers. One post a month is not going to do it. Twitter requires more frequent posts, but Diaspora seems to work well with one photo a day, plus the odd news item. On sites like Diaspora you don't want to flood the readers either, as their streams are usually pretty busy as it is. Be there, but don't be annoying.

I think that COPA Flights can benefit from using social media to promote their organization. The trick is to have volunteers who will manage it, preferably one person for each medium the flight is on. Have a plan as to what you will post and keep it fun for the readers.
Posted by Adam Hunt at 16:11