An Interview with Robert Fraser of HIPEC Aircraft Coatings


Perhaps I can start by asking about your aviation background and how you came to be involved with the HIPEC aircraft fabric system?

My Dad owned a Luscombe so I started flying very early. I received my pilot's licence at 17, through air cadets and have been flying for more than 40 years, with many licence endorsements added along the way.

I presently own four flying aircraft, a Decathlon, a Zenair STOL CH 750, a SeaRey amphibian and a Grob motorglider, plus I have three additional aircraft under construction using HIPEC: a Bushmaster, a second SeaRey and a Chipmunk. My formal education is five years of university in civil and structural engineering, with a math major.

One of our good members at the Stanley Aviation Club here in Nova Scotia indicated there was a Rans aircraft covered with the HIPEC system, that was just applied with a paint roller. I viewed the aircraft and was so impressed with the finish that at first I did not believe him.

We started getting more information on the HIPEC system and met with company founder, Chris Falconar, early in the summer of 2018, purchasing the company in January 2019. We started the process to get a Supplemental Type Certificate (STC) for all certified aircraft in the fall of 2018 and received the STC in late May 2019.

Chris was a spry 92 years young at this time and was still going strong, but decided it was time to retire. He was an extremely talented person with endless amounts of aviation knowledge. We will miss him dearly. (Editor’s note: Chris Falconar died on 9 September 2018)

Where is the company located?

It is a registered Alberta company and our products are made in Edmonton, but our office and hangar are located in Porters Lake, Nova Scotia.

How big is the company?

Presently there are two people in the office and four dealers, plus subcontractors to build our airplanes.

Do you have dealers or sell direct?

We mostly sell direct, but we have an Ontario and a western Alberta representative, plus a US and Australian one also, Manna Aviation.

Can you describe how HIPEC is applied and what makes it different from the other systems?

HIPEC is a well-researched and developed, proven system that's been flying for 50 plus years with thousands of examples. No rib stitching, no rivets and no tapes are required. It is a seamless system with blending of the overlaps, which disappear after four or five brushed applications of thinned HIPEC Attach Glue (HAG) over the seams.

HIPEC is STC'd for almost all certified aircraft, with ease of application (just 3 coats) being a strong advantage. It is the lightest system by far available.

The fabric is attached to the structure using HAG (similar to most systems), then ironed tight using two heat ranges. Then, four or five small, brushed-on, thinned HAG coats are applied to the seams.

The first coat of HIPEC Sun Barrier is then rolled or brushed on. It soaks through the fabric and adheres it to the structure whether metal, composite or wood. A second coat can be cross sprayed then lightly sanded, for optimum results. The Sun Barrier is a single component, moisture cured, silver-grey polyurethane with unmatched bonding characteristics. It saves a huge amount of labour (100 hours or more on an aircraft). The topcoat is then sprayed on, resulting in a long lasting high gloss finish that retains its flexibility indefinitely. For an award-winning level of finish, a second topcoat can also be sprayed on. It's really a three coat system, versus the competitions’ six to eight coat systems. It even meets or exceeds FAR 23.337 design requirements for aerobatic aircraft, without applying rib stitching. It has seven times the peel strength versus most other fabric systems and has never had a single lab failure, ever.

HIPEC provides a faster and better performing, lighter airplane, with its seamless finish, with no draggy rib stitching, rivets or reinforcing tapes that have extra coatings to fill the tapes. The tapes alone can cost $500 or more to finish a plane.

How does it compare for cost, speed of application and ease of use?

It is the most cost effective and one of the lightest systems there is. It can be quickly applied with very little sanding. It is one third the cost of a single coat European system and is significantly more economical than other competitors’ multiple coat systems. For instance, on a rudder or elevator, you can apply the fabric on day one with HAG, allow overnight curing, shrink the fabric and apply the Sun Barrier in the morning, spray the second coat of SB in the evening, light sand and tack rag, then spray the topcoat the next morning and you are done. Actually, all three coats can be applied with only a roller with excellent results, when done in a clean and dust-free environment.

The finished, cured weight on a Just Aviation STOL aircraft will be 18 to 20 pounds, with a Citabria tipping the scales at approximately 32 pounds.

What precautions are required when applying HIPEC? 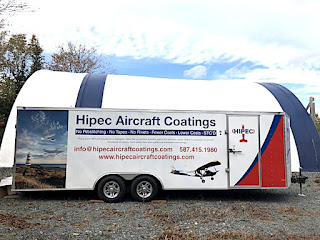 You will need good ventilation, a clean dust free work area and proper personal protective equipment (PPE). The HIPEC Sun Barrier, a single component product, has to be applied in a higher relative humidity setting (with a wet floor) for best results, as it is moisture-cured. A good organic breathing filter is recommended for spraying, although our new HIPEC system “B” can be ordered at no additional cost and it is a volatile organic compound (VOC) free product.

The system must be applied as described in our new 23rd edition manual, with no “MacGyvering” whatsoever. The HIPEC products were scientifically developed and rigourously tested to be chemically compatible. All our products are mixed simply one part “A” to one part “B”, so no special formulas are required.

What kind of fabric lifespan can you realistically expect on an aircraft with HIPEC, stored in a hangar or stored outdoors?

While attending Oshkosh in 2019 as a vendor, we were shown examples of aircraft that were covered in the early 1980s and still looking fine. Our Ontario dealer, Monty Wells, covered his J3 in 2000 and it still looks great. It was subject to a hail storm three years ago, which caused several punctures. His friend's plane, same place, same storm, was un-airworthy from the hail damage. Monty repaired his with several “loonie” dollar sized pre-finished patches.

If hangared, the HIPEC finish will easily last many decades.

Any idea how many aircraft are flying with HIPEC?

It would be in the thousands, as it has been around for a very long time.

At Oshkosh in 2019 we were overwhelmed by response to HIPEC, including its new STC for use on certified aircraft. The polyurethane paints are much more durable than the vinyl lines of paint.

I noted your company also sells a hangar floor coating system. How was developed?

With my environmental company, we were involved in many floor coating applications and it was just a natural progression. Our system provides a super-durable, long-lasting and less slippery product. It costs approximately $1.25 per square foot and is available in many colors. It really adds new life to a hangar or garage and is very easy to apply.

Any future plans for the company?

At this point in time, we are aggressively promoting HIPEC, after years of little or no advertising.

We will attend Oshkosh AirVenture in 2020 with a highly modified Smith Super Cub built by our western dealer, Shane Madson, from the Edmonton area. It will, of course, feature a HIPEC paint job.

We have had some excellent responses from many well-established aircraft companies using our product, as it provides them with a much lighter aircraft, large labour-savings and a well-proven system.

Anything else we should know about HIPEC?

We have test sample kits available which will do a complete rudder and elevator with our entire process, including the new manual.

We will soon be completing our brand new HIPEC Bushmaster demonstrator, complete with a 200 hp Lycoming engine, plus the modified Super Cub, both featuring HIPEC high quality, lightweight paint jobs.

We have 45,000 colors to choose from with high or low gloss, metallics, pearls, candied and fluorescents available.

Just patiently waiting for approval of a HIPEC FAA STC!