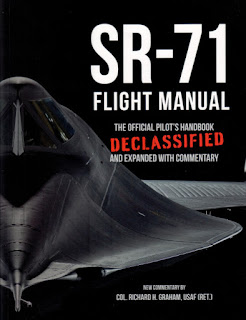 Which pilot hasn't wanted to take an SR-71 up to Mach 3.2 at 85,000 feet? Sadly the SR-71 flew its last mission on 9 October 1999, finishing up a 35 year career that started with its first flight on 22 December 1964. Thirty-two of the iconic black reconnaissance aircraft were built and, of those, 12 were crashed. The surviving SR-71s are now all museum pieces, although the Blackbird lives on in several video games. While you can't fly the real thing anymore, you can get a true insider's feel for what it would have been like to be assigned to fly them at the 9th Strategic Reconnaissance Wing at Beale AFB in California, by studying the aircraft's flight manual.

The USAF SR-71 Flight Manual was of course once classified as "secret", but with the aircraft now retired for 17 years the book has been largely declassified and has now been published for public consumption by Voyageur Press, part of the Quarto Publishing Group.

To literally add colour to the original flight manual text, Voyageur Press engaged retired SR-71 pilot and 9th Strategic Reconnaissance Wing commander, Colonel Richard H. Graham, to create an introduction to the aircraft. Graham's contribution consists of the first 63 velum pages of text and photos, many of them in colour. Graham's text brings the aircraft to life as he relates many tales that illustrate the use of the aircraft in service, plus stories from other pilots and Reconnaissance Sensor Operators (RSOs) who flew the SR-71. His introduction is divided into sections that match the layout of the flight manual that follows and add very useful illumination. He even includes one official photo of the A-12 "Oxcart" single seater that preceded the SR-71 into service, too.

Following Graham's extensive introduction, the flight manual itself takes up the rest of the volume. It covers the SR-71A two seat reconnaissance aircraft and also includes the supplements about the SR-71B trainer model, of which two were built and used to check pilots out on the SR-71.

The flight manual is divided into sections covering: description and operation, the SR-71B trainer, normal operations, emergency procedures, navigation and sensor equipment, operating limitations, flight characteristics and all-weather operation. These are followed by appendix 1 which includes a glossary and performance charts and then finally an index. The SR-71B description and the index sections have been printed out of order, but it isn't too confusing.

I have to admit that I have a bit of a love for military writing and especially aircraft manuals. It was probably the two decades I spent in the Canadian Forces as a military pilot, including time at staff school, learning to write with "clarity, brevity and conciseness", as well as working in headquarters doing military writing, that left me with an enjoyment of the crisp terseness of good quality military prose. This book has it in spades, too. I'll give a couple of examples here. This is the basic description of the aircraft:

"The SR-71 is a delta-wing, two-place aircraft powered by two axial-flow turbojet engines. The aircraft, built by the Lockheed California Company, features titanium construction and is designed to operate at high altitudes and high supersonic speeds. The aircraft has very thin wings, twin canted rudders mounted on top of the engine nacelles, and a pronounced fuselage "chine" extending from the nose to the leading edge of the wing. The propulsion system uses movable spikes to vary air inlet geometry. Surface controls are elevons and rudders, operated by irreversible hydraulic actuators with artificial pilot control feel. The aircraft can be refueled either in-flight or on the ground through separate receptacles that feed into a common refueling line. A drag chute is provided to augment the six-mainwheel brakes. The aircraft is painted black to reduce internal temperatures when at high speed."

Reading the manual starts to give a flavour beyond mere counting of rivets and the reader gets drawn into not only the amazing engineering that went into creating a Mach 3.2 aircraft in the early 1960s, but also what the operational crews, pilots and RSOs who flew it were dealing with, all in that terse military, no-nonsense style.

"After ejection, descent is normally made to approximately 15,000 feet while in the seat with drogue chute stabilization. (Refer to Figure 3-3.) Note: The seat may spin and rotate while descending with the drogue chute deployed. It may be possible to arrest such motions by using the arms and hands in the airstream."

Ejection near the maximum operating altitude of 85,000 feet must have been quite an experience for those who survived it!

The flight manual includes 139 pages of emergency procedures, all of which would have been learned and memorized. As a crew member your life depended on it!

A large part of section IV, navigation and sensor equipment, is dedicated to describing the Astrointertial Navigation System, which did its own automatic star plots by day and night to continuously update the on-board gyroscope-based INS. This was groundbreaking technology for the 1960s and without this autonomous system pilots would have easily become lost in the SR-71. As test pilot Paul Crickmore wrote about the SR-71, "you've never been lost until you've been lost at Mach 3." The ground disappears behind you fast at 35 miles per minute!

The book also provides great detail about air-to-air refuelling, the life-blood of all SR-71 operations. Almost every mission required dropping down to 25,000 to 30,000 feet and meeting up with a KC-135 or KC-10 tanker carrying the SR-71's unique JP-7 fuel, at least once and frequently more often. Sometimes this meant refueling in the dark and often the SR-71 needed one engine in afterburner at those inefficient altitudes to form up on the tanker. Pilots flew with their seats adjusted down low to provide the best view of the tanker above them.

As you read the flight manual the reader slowly builds up a picture of the effort required to design, build, fly and maintain this remarkable aircraft. You gain a new appreciation for what it meant to be over hostile lands, taking photos at more than three times the speed of sound and 16 miles up. It was an extraordinary aircraft and the flight manual tells its story well.

While this would be a great addition to any aviator's bookshelf, the manual reprint is not perfect. The book has 74 pages missing that show up in the "list of effective pages", but not in the book. Missing are pages 1-35 to 1-38, 1-74 to 1-75, 4-79 to 4-104, 4-119 to 4-160. The publisher confirmed to me that, "the pages in question were never declassified" and so could not be included. Judging from the table of contents the missing pages include such mundane text as how to operate the TACAN navigation radio and a description of the windshield, as well as subjects like the optical and electronic sensors carried, plus the synthetic aperture radar system. This does detract somewhat from the book, but it doesn't kill it. I have suggested to the publisher that a note in the front of the book about the missing pages might be helpful to readers.

The Kindle version is about $20 and hard cover copy now runs around $45.