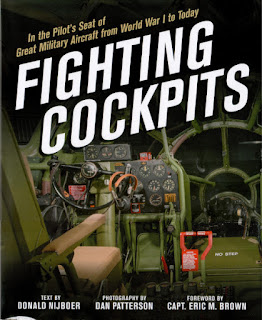 Fighting Cockpits is the latest work from the team of aviation historian Donald Nijboer and photographer Dan Patterson. The two have collaborated before on other books in this series, Cockpit: An Illustrated History of World War II Aircraft Interiors, Gunner: An Illustrated History of World War II Aircraft Turrets and Gun Positions and Cockpits of the Cold War. This new work, just published in June 2016, covers a wider period of aviation history, ranging from the First World War to jet fighters of the 21st century.

Fighting Cockpits also features a foreword by legendary RN test pilot Eric M. Brown, who also contributes some aircraft impressions to the text as well. Brown died during the work completing this book, on 21 February 2016, at age 97.

Each chapter includes an introduction to the historical period to set the stage, plus a list of typical things that an aviator would find in his aircraft's cockpit during that period. The entries for each aircraft generally run two to four pages, starting with Nijboer's brief history of the type, its development and operational employment. This is followed by Pilot Impressions, by pilots who have flown the type. Some are by operational military pilots, some by test pilots, like Brown, who were given the job of evaluating the aircraft for military purposes and some by museum pilots who fly them today. The second page of each entry then features Patterson's photo of the cockpit, usually taken from the pilot's point-of-view. Most of these have been shot in museums and so Patterson has blacked out the view forward, which would have otherwise shown other museum aircraft or building walls. The result is that distractions are eliminated. One exception is the Grumman EA-6B Prowler, shot on an airfield ramp, which needed no black-out treatment.

Between the Wars, The Rise of the Monoplane, covers the interwar period and the switch in military aviation from biplanes to monoplanes. It includes the Martin MB-2 bomber, Hawker Hind, Fiat CR.32, Boeing P-26 Peashooter, Curtiss F9C, Sparrowhawk, Vought SB2U Vindicator, Westland Lysander and the PZL P.11.

The majority of the entries then have a few operational photos that show the general layout of the aircraft, its shape and markings. A few of the entries, like the Halberstadt CL.IV, Martin MB-2 and the Fiat CR.42, have no other photos beyond the cockpit images. This is unfortunate, as these are rare types and many readers will be sent scurrying to Wikipedia to see what the aircraft looks like in overall view. Even a small inset photo of the whole aircraft in an unused corner of the full-page cockpit photo would have been appreciated.

The book has lots of detail, both in Patterson's immaculate photographs and in Nijboer's descriptive text, including his notes on the evolution of ergonomics and cockpit instrumentation over a hundred years of aircraft building.

This book has some overlap in aircraft types with the team's 1998 book, Cockpit: An Illustrated History of World War II Aircraft Interiors, as some aircraft, such as the Mustang, Me 109 and Spitfire appear in both books, but there is all new text, along with new cockpit photos, too, for each entry.

Some people may not see the value of a book like this, as it is pictures of museum aircraft, which can been seen by anyone visiting the museum, but the book does offer two distinct advantages. First this collection was assembled from a large number of museums, including Ottawa's own Canada Aviation and Space Museum in Rockcliffe, the Swedish Air Force Museum, The New England Air Museum, the National Museum of the US Air Force, the RAF Museum and of course the Smithsonian. A few were shot on air base ramps, like the Grumman EA-6B Prowler, photographed on the ramp of the Marine Corps Air Station in Yuma, Arizona. A person would have to do a lot of travelling to see in person the aircraft that Patterson has photographed.

The second factor that this book gives the reader something you can't generally get from a museum visit, the view from the pilot's seat. While a couple of cockpit shots were done from outside the aircraft, like the Arado Ar 234 Blitz, the rest are shot from the pilot's perspective, something not many museums afford the casual visitor. Creating a book like this obviously grants special access to the aircraft that the public just doesn't routinely get. That is worthwhile, alone.

Fighting Cockpits is a book that will appeal to aviation history buffs of all ages. Engineers and aircraft designers may also find it of interest, to trace the history of cockpit ergonomics and see how many earlier aircraft were designed in such a way that pilots had to learn to fly them, despite the designer's work.

I am hoping that the team of Nijboer and Patterson will one day turn their talents to general aviation aircraft past and present and bring us a view of the cockpits of light aircraft, gliders, motor gliders, gyroplanes, airships, helicopters, air tankers, crop dusters, flying boats, amphibians, hang gliders, homebuilts, ultralights and the other small aircraft found around the world.