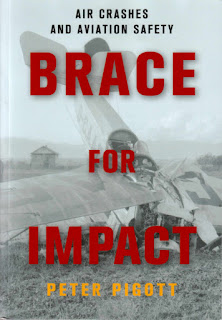 Brace For Impact is Ottawa-based author Peter Pigott's 20th book and his 14th on an aviation subject. This certainly makes him one of Canada's more prolific aviation authors.

This new work tackles the subject of aircraft accidents and in particular Canadian aircraft accidents, although for perspective some notable accidents in other countries are touched upon. The book covers a history of Canadian aviation accident investigation, including the agencies and some of the people involved, the politics, the technology and, of course, describes many of the key aircraft accidents that have occurred.

The book has 18 chapters, interweaving the accident stories with the history of how the profession of aircraft accident investigation has progressed, as accident numbers and their complexity increased. The author especially focuses on how the introduction of cockpit voice recorders and flight data recorders has allowed the investigation of large aircraft accidents to be greatly improved.

Starting from the very first pioneering accidents in the very early 20th century, the book covers the First World War, the post-war barnstorming era, the beginnings of the airmail and the early airline passenger flights. Additional chapters cover civil transport in the Second World War, the coming of the jet age and the inevitable discussion of the early deHavilland Comet crashes as well as the landmark mid-air collision between an RCAF Harvard trainer and a Trans Canada Airlines North Star over Moose Jaw.

Also covered is the demise of the Canadian Aviation Safety Board and its replacement with the Transportation Safety Board and some of the reasons for that change. The author also tackles the transfer of the nation's ATC to Nav Canada, citing its closure of facilities as a cause factor in the crash of several aircraft, including the mid-air collision of two Cessnas at Maschouche on 7 December 1997 after a portable control tower there had been decommissioned and the Air Canada CRJ crash at Fredericton, after the control tower had been replaced with what the author terms "a less expensive 'flight servicing station'".

The author saves some of his most scathing criticism for Michel Leblanc, a Canadian airline CEO, he describes as "callous" and "lacking ethics", as an example of how a top-down corporate culture can contribute to safety issues in airliner operations.

As can be seen from the list of accidents, the majority of coverage in this book is of airline flying, with mention of a few military accidents, like the Canso that crashed in Ottawa's Lac Deschênes in July 1945, with five crew members killed. General aviation is represented in a few of the case studies, including the interesting example of a mid-air collision between a Beechcraft Bonanza and Piper Cherokee over Warrington, Virginia, on 28 May 2012. Both aircraft were US-registered and the accident happened over the US, but the TSB was asked to investigate, as the two pilots involved were an FAA accident investigator and the NTSB's chief medical officer. The Canadian agency was asked to investigate to eliminate any potential conflict of interest in having the US NTSB handle the case. The TSB determined that it was a failure to "see and avoid" on both pilot's parts.

Piggot starts off the book with an invocation against the media and their tendency to sensationalize aircraft accidents. He writes on page 11, "because air crashes are so infrequent (compared with the daily carnage on the highways), when they do happen, they make for gut-wrenching, fear-inducing headlines and dramatic images." On page 65 he emphasizes the point over the Hindenburg crash in 1937, "the media's first resort in an air crash is to sensationalize it, and there was no better way in this case than to suspect sabotage." Of course the Hindenburg was brought down by far less dramatic reasons than sabotage. But with chapter titles like "Douglas Death Cruisers and Mourning Becomes Electra", "Terror in Tenerife, Pilot Error", and "Air Traffic Chaos" as well as "Nationair and ValuJet: Folly Upon Folly", I am not sure the author has entirely escaped this effect.

The book is generally well-written and illustrated, with many black and white, as well as colour photographs. It is an engaging read. One of the questions I asked myself while reading the book was who the target audience is. While light aircraft pilots may read this book, the focus on airline accidents and the lack of technical detail on accident causes makes this book of limited use as a flight safety text, for understanding accidents and learning to avoid them operationally. There are some technical errors in the text that non-pilots often make in writing aviation books, too, such as the description of a pilot increasing power and attempting to climb by pulling "the control throttle all the way back". As an aviation history book this work will appeal most to the aviation history buff.