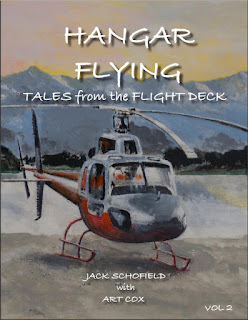 Hangar Flying - Tales From the Flight Deck, Volume 2 is, of course, the much-anticipated second installment to volume 1, which Jack Schofield and Arthur Cox released last autumn. This second book in the series continues the tradition set by the earlier work, of collecting together short flying stories written by the pilots who were there "when it happened". The book also features a wealth of colour and black and white photos, plus the artwork of both Schofield and Cox, too.

Another tradition continued with this volume in the series is that the book is made available to read for free. This volume has some advertising in it, but all are ads are for the other books that Schofield offers from his own Mayne Island, British Columbia based publishing house, Coast Dog Press. His plan is to continue the series to at least a third volume in the near future. As with the last volume, as a COPA member, all you have to do is send Schofield an email and he will send you the link for the book. He will also send you a note when the next volume is out. It is hard to beat all that service and for free, too!

So what do you get for free this time around? Hangar Flying - Tales From the Flight Deck, Volume 2 is 78 pages, just six pages shorter than the first volume. It is not a long book and like the previous edition took me about an hour to read it.

Each of the chapters are short flying stories. As last time, some are serious and some are amusing, but all are worth thinking about, reading and enjoying.

In volume 2 you get:

I was quite pleased to see the story by John Addison, the former RAF Vulcan pilot, who was the Chief Flying Instructor at Victoria Flying Club when I learned to fly there, almost 40 years ago. Ken Armstrong's name will be familiar to COPA members, as he served many years on the COPA board as a director from BC.

As with the first installment, I greatly enjoyed this book too. It is a fun short read and may lead many pilots to think about why they haven't yet written down their own favourite flying tales. Given the price, there is no reason that this volume shouldn't find a home on your laptop or tablet, too.