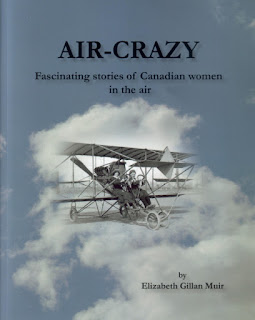 Air Crazy by Elizabeth Gillan Muir talks about how, over a 100 years ago, airplanes were only flown by men and woman weren’t even supposed to be passengers. The book has a short story for each woman and talks about their work and experiences with flying. It tells the stories in time order from 1912 to 2000 and each chapter has photos.

This book was interesting in many ways, such as the nicknames that were given to the pilots like “the flying school girl”. Not all of the women were pilots; some were the first woman to be passengers on a plane. I feel that it would be unfair to not be able to do something that you love and these women did it anyway. I found all of the stories fun to read especially the last story about Maryse Carmichael because she was the first woman to fly with the Snowbirds Canadian Forces acrobatic team. I didn’t know what the Snowbirds were before reading this book.

I think that Air Crazy is good for kids ages 8 – 12 because if you are older you might find it a little too easy. Also, this book is good for a young girl who is interested in flying or planes. I think it should be in a library or given as a gift.

The back of the book tells us that the author, Elizabeth, is a historian in Toronto. I find it interesting that she is a historian because if she wasn’t a historian then the books that she writes might be fairy tales. I like that the stories in the book are real. She has written stories for children’s magazines in Canada, the United States, Australia, and Great Britain. I think it is interesting that “She was paid $1.00 for her first story, “Marsh Hens”, which was published in Child Life when she was ten. She has recently published two adult books: Riverdale: east of the Don and Canadian in the sky: 100 years of flight”.

In general Air-Crazy by Elizabeth Gillan Muir is a great book for people who like the idea of flight and it gives the message that everyone should take a shot at anything that people say they can’t do.

Leeloo Lengagne is COPA's reviewer of aviation books for children. She is a student of art and literature and is eleven years old.