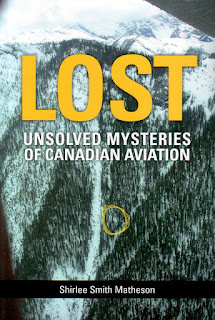 This book, by author Shirlee Smith Matheson, was originally published in 2005 as Lost: True Stories of Canadian Aviation Tragedies. The new edition, with a new name, is more than just a reprint, it expands some stories and even completes some, when old wrecks have been located in the intervening ten years since the first version came out.

The theme that ties this collection of chapters about missing aircraft is how easy it is to completely lose an aircraft in the Canadian wildness and not just small aircraft, as some aircraft lost for years have been quite large.

The book starts with the story of Ken Leishman and his 1979 disappearance while flying a medevac in a Piper Aztec between Sandy Lake, Ontario and Thunder Bay. The charismatic Leishman literally lived a life of crime, having stolen everything from furniture to gold and carried out bank robberies, but he was caught and did jail time. He even completed several jail breaks, but it was after his debt to society had been paid and he seemed to be "going straight" that he disappeared doing a "real" job, flying for a commercial carrier. His aircraft wreck was found some five months later.

Another chapter covers the loss of Sigismund Levanevsky and the Soviet four-engined Bolkhovitinov DB-A bomber he was flying across the North Pole in 1937 as part of raising Soviet technical prestige and that was never found.

There is the story of Gavin Edkins and his Cessna 150 flight from Fort McMurray, Alberta to Red Deer in 1996 that never arrived. In that chapter author Matheson criticizes the Canadian Forces SAR team and their scientific search methods, giving a lot more credence to people's dreams about where the aircraft was and the inherent wisdom of the local bush pilots, but when given free reign none of them could locate the aircraft either and it remains lost to this day. That same chapter covers the strange story of gold miners and suspicious mine stakes, ending in the loss of a Fairchild 82, pilot Chuck McAvoy and two American geologists in 1964. That wreck was located, 39 years later, in 2003.

The author next delves into British Columbia and its habit of "collecting wrecked planes". This chapter covers the 1942 crash of a Lockheed 14-H2 Super Electra en route to Vancouver from Prince George, BC. Its ten passengers and crew of three died when it hit Mount William Knight in the Cheam Range. The aircraft was not found for eight months. Another BC wreck was an RCAF Consolidated B-24 Liberator bomber that disappeared in 1945 on a training flight from Abbotsford, BC. It was found three weeks later, also in the Cheam Range. A Trans Canada Airways Canadair North Star with 66 people on board disappeared in 1956 on a flight from Vancouver. The captain declared to ATC that one of the North Star's Merlin engines had caught fire and was heading back to Vancouver when it impacted Mount Slesse, not far from the other two. It was found five months later, possibly the victim of mountain wave conditions. There had been no survivors.

Other chapters cover war hero and seasoned bush pilot Johnny Bourassa's 1951 disappearance, another wreck that was never found, plus the crash of a US Army crew and their Martin B-26 Marauder in 1942 on what was to be a ferry trip from the US through Canada to the UK. It crashed in Labrador and was noted for the fact that when it was found the captain had left a lengthy diary that detailed how the crew eventually starved to death awaiting a rescue that never came. SAR during World War Two was often non-existent. Further stories include a U-boat hunting Lockheed Hudson that has eluded location in Nova Scotia since 1943 and a Boeing B-17G Flying Fortress lost in Labrador. Another chapter deals with famous hockey player Bill Barilko, who had scored the Stanley Cup winning goal for the Toronto Maple Leafs in 1951, but who disappeared on a fishing trip with a friend just a few months later, a wreck that wasn't found for 11 years.

For her final chapter the author returns to British Columbia's "Graveyard of Lost Planes" and relates a set of stories that include a lost Convair B-36, an enormous six-engined bomber that iced up, lost three engines and jettisoned a "Fat Man" atomic bomb over BC waters in 1950, the USAF's first "Broken Arrow" incident. The crew bailed out and the bomber flew on to crash, but it was not found for three years.

Overall the book is an interesting read for all aviators. It can be a bit dramatic in places, but never gruesome. It really drives home the reality that you can never be "too prepared" to survive in the terrain that is under your route of flight, because, even with modern ELTs and SAR, some aircraft still go missing and are never found. You really want to stack the odds in your favour.

The publisher, Frontenac House, is supported by the Canada Council for the Arts and also the Alberta Government's Media Development Fund.