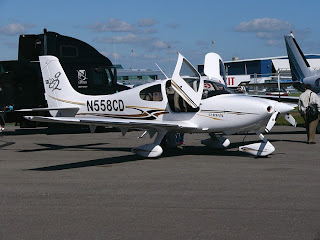 After struggling along financially though the recession of 2008-2011 Cirrus Aircraft was running short of aircraft orders, cash and laying off staff. Things at the Duluth, Minnesota aircraft builder were not looking good. Then in February 2011, Cirrus was sold for US$210M to China Aviation Industry General Aircraft (CAIGA), a subsidiary of Aviation Industry Corporation. CAIGA is wholly owned by the Government of the People's Republic of China.

At the time AVweb's Russ Niles said "Chinese participation in the aviation industry isn't necessarily a bad thing and the folks in Duluth and Grand Forks could have suffered a worse fate. In the absence of a sale, bankruptcy was a real possibility for Cirrus and it might have been hard for a trustee to justify operating the business with the numbers it was showing. As for where it leaves current Cirrus owners and those thinking of buying one, the sale is probably a positive thing." I posted about this event and I agree with Russ, it was either Chinese ownership or the company was probably finished.

Every time North Americans buy Chinese goods, at places like Walmart, the Chinese government makes money and then uses that cash to buy up North American companies. That is just the way whatever we have that passes for free enterprise works these days, at least regarding Chinese state owned companies.

So Cirrus got settled into being owned by probably the richest entity of any kind on the planet, the Government of the People's Republic of China. Suddenly investment was available for mothballed programs like the Cirrus Vision SF50 single engine jet, workers were recalled and production increased. All well and good and as expected.

Then, in early March 2013 it seemed that the company was going, hat in hand, to the city council of Grand Forks, North Dakota, where Cirrus has its secondary plant, asking for a US$950,000 loan to buy a new autoclave. The company already has large outstanding loans from the city and this loan would have just increased the payments.

Even more surprising was the way it turned out, with council initially refusing the loan, concerned about the company's ability to repay it, then relenting, apologizing for the doubt and granting the loan. So now Cirrus can go and order their new autoclave, something they claim will create ten new jobs in Grand Forks.

Personally I don't really get it. Since when is a US city council now a bank, loaning money to companies? Since when do small US municipalities, in one of the most indebted nations on earth, the USA, lend tax money, collected from their residents, to the communist Government of the People's Republic of China, as I noted, probably the richest entity on earth right now? Is this what is meant by capitalism and free enterprise in the 21st century?

I realize that this is all tied to jobs and if Grand Forks wants manufacturing jobs to stay in the city then they have to pay companies to stay there or else some other municipality will lure them away, but the way this loan looks, I think it is really time to rethink that whole flawed premise. Foreign buyouts and investments should not turn out to be a hostage taking.

Americans always tell me how much they hate communism and love their free enterprise system, where anyone can build up a business though sheer determination and hard work. To me a US municipality lending money to the Chinese government to build airplanes to sell to rich Americans doesn't seem to fit any notion of capitalism I know of, no matter how hard I squint.

Feel free to tell me that I am wrong!

Adam, I think you need a new pair of economic glasses. Cities all over the world recognize that investments in businesses they want to see grow tend to help employment, property taxes, etc. Sure it tends to be self defeating when all cities bid for businesses.

Having watched the average Chinese entrepreneur in China one must wonder whether the bastion of free enterprise is the USA or China? The USA claims the title but the facts seem to support a different conclusion. The Chinese retail markets are a free-for-all. There is no evidence of government controls, except the permission to do as one pleases.

I am not so sure is it poor economics for a state to help industries it wants more of, and penalize those it wants less of. In fact, this idea is taught in Economics 101 in most schools. China clearly gets it. The US feds I'm not so sure, but the local governments (i.e. Cities) in the USA clearly understand.

Neither China nor the USA questions who the buyers are. It is more important economically that there are buyers, and sellers. Is there a spark of envy and jealously in your last paragraph?

Oh I would 100% agree with you if Cirrus was owned by a private Chinese company.

Private enterprises in China are very competitive and run in close to a totally unfettered free enterprise environment there. You sink or swim on your own wits, skill and monetary capitalization.

But in this case we are talking the Chinese government, not private enterprise. They buy up private companies like Cirrus for strategic national goals, like acquiring manufacturing expertise and creating employment at home.

My final comment was trying to express the odd idea that the self-described communist PRC government is borrowing money from a US municipality, so they can build airplanes and sell them to rich Americans, who probably mostly made their money in the US capitalist system. That is not a criticism of the Americans who buy the aircraft and, yes, they are rich Americans, since these airplanes are not for poor people. The 2013 SR22T GTS with FIKI has a base price of US$724,900.

A communist government using US tax money loaned to them to sell airplanes to rich Americans doesn't sound like capitalist or communism to me. Perhaps it is just 21st century opportunism.

On the plus side, at one time during the Cold War the Americans used to live in fear of attack by the Russians and the Chinese. I don't think the US has to ever worry about the Chinese attacking them, as they own so much of the USA they would only damage their own investments there.

In a way, though, foreign ownership is a sort of invasion, isn't it? Only if it is done right no one gets hurt.

Well, yes that could well happen. As this one incident shows even the Chinese government, with their very deep pockets, aren't prepared to invest that much in the company, at last not when they can get someone else to do it.