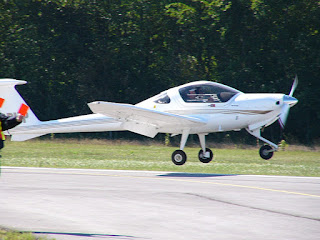 I have written quite a lot about the middle and far eastern buyout of North American and European aerospace manufacturers recently, but then there has been lots to report! Back in 2011 it was announced that Diamond Aircraft Canada had been purchased by the Medrar Financial Group of Dubai. Things went bad, though and the repercussions are just being felt this week.

In the 2010-11 period Diamond had embarked on a program of developing new aircraft designs, like the DA50 Super Star, the twin-engined DA52 and especially the D-Jet, its single-engined jet program. This all required capital and the company was running short of money. During the May 2011 Canadian federal election campaign Diamond threatened to close its London, Ontario plant if government help was not forthcoming. The Conservative government didn't bite, said no and the company finally settled on the buyout by Medrar instead in November 2011.

But it was just today that it was officially revealed by Diamond that the deal with Medrar was never completed and no cash changed hands. Diamond had not previously announced that, just quietly taken down the original press release on the deal, although the announcement can still be seen on Archive.org. There was a rumour on 19 February 2013 that the deal with Medrar had failed so I wasn't totally surprised when the lay off announcement quickly followed.

It seems that the company has been surviving on its own shareholder funding for the last 16 months, while it looked for alternatives. That money seems to have run out this past week and Diamond has now laid off the majority of its workers, leaving only those building ordered aircraft and the parts department, to keep the existing fleet flying. The company has indicated that it needs to restructure and then hopes to bring back the majority of its workers. I guess we will see how that pans out over time.

In general I have stated that these sorts of foreign buyouts are good for the aerospace industry, because investment from North American and European sources seems to be totally absent these days. Without these middle eastern and far eastern buyouts companies like Cirrus and Continental would probably not be in business today. Diamond obviously needs some investment and right away, or it may not be in a position to reopen its doors and carry on its development projects.

In a way it is too bad that Diamond's management took such a secretive approach to the Medrar buyout, not announcing that it had failed, because a potential buyer may have seen that and come forward on their own. With this secretive approach I think most people reading the aviation press would have thought that everything was rosy and no help was needed, until the announcement of the lay-offs this week. Perhaps there is a lesson there for other companies?

Hopefully Diamond will find a buyer quickly and get their employees back to work soon.

Here is my revised current list of western aerospace firms bought out so far: