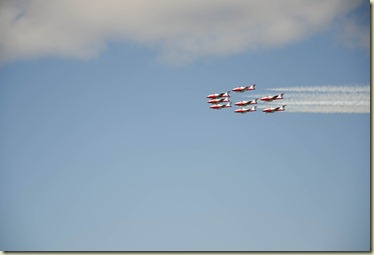 Good on you guys and gals at Vintage Wings Canada! Your 2012 Wings Over Gatineau-Ottawa was a great airshow! Thanks for allowing pilots to fly-in and see the show.

Showers dampened Saturday’s event causing folks to seek shelter under the wings of display aircraft. Nonetheless, the show was largely uninterrupted and Saturday’s smaller crowed went home with smiles on their faces. I only attended on Sunday and the show was great and the crowds large. I understand over 30,000 showed up over the weekend to see Canada’s Snowbirds, CF-18 Demo Team, the Discovery Air F-86 Golden Hawk Saber, wing walker Carol Pilon and much of the Vintage Wings fleet of WWII hero planes.

The only disappointment was a mechanical problem kept the Canadian Warplane Heritage Mynarski Memorial Lancaster on the ground on Sunday. Vintage Wings’ Spitfire, Hurricane and Corsair along with other aircraft joined a formation to fly past Rockcliffe Airport to help the Canadian Aviation and Space Museum celebrate of the Battle of Britain.

The event is well on its way to being the major family event in the Nations Captial each September. The airshow, which expanded from a one to two-day event this year, takes place at the Vintage Wings of Canada hangar at the Gatineau-Ottawa Executive Airport (CYND), just 15 minutes from Ottawa. The Wings Over Gatineau-Ottawa airshow returns September 14 and 15, 2013. See you there, eh.