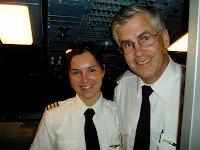 On behalf of the East Canada Section 99s I would like to extend an invitation to participate in some of our weekend activities 1 June and 2 June 2012, all happening at the Sheraton Hotel 150 Albert St. in downtown Ottawa.

For $60 you can join in Friday's afternoon Safety Seminar, Friday evening's Wine and cheese, receive an Delegate Insider Badge(D.I.B.) providing discounts to many restaurants and entertainment places in Ottawa the weekend of June 1-2/12. The 99s International President elect will be in attendance.

Saturday evening at the Sheraton Hotel in Ottawa will be a fabulous dinner with guest speakers Heather Fleck and her father Rob Fleck of Vintage Wings. Please see bios below.

Included with the $60 registration:

Safety Seminar by Kathy Fox from 14:30-16:00 at Canada's Air and Space Museum at CYRO. You can even park your aircraft at the Museum, then later, taxi over to the Rockcliffe Flying Club for weekend parking. Will focus on lessons learned from TSB accident investigations. Following the seminar, you can take a self-guided tour compliments of the Museum as they have waived the entrance fee for people registered at our conference.

Wine and cheese reception and Meet and Greet. If you just wish to attend only the reception the cost is $10.

Saturday you can take advantage of your D.I. badge for the day. Dinner in the evening on the Penthouse of the Sheraton at 150 Albert St. in Ottawa. Cost for dinner only is $45. For information about the guest speakers, please read below.

Great items for sale in a silent auction, a 50/50 draw and other surprises.

Heather Fleck grew up in the world of aviation. Despite having a father whose profession and passion has always centered around airplanes, she never considered a career in the field until being faced with the big decision at the end of high school. Heather attended Seneca College in Toronto, obtaining a Commercial Multi-IFR, Integrated ATPL, and Applied Degree in Flight Technology. To help pay for beer (and school) she worked as a ramp rat and dispatcher at a local flight school, and taught Helicopter Groundschool. She also volunteered as a Big Sister.

Upon graduation, she was fortunate to be selected as part of a test group of students, who, for the first time in Canada, were taken directly from flight college and put into flying positions at a major airline. She moved to Calgary, AB, to fly for Jazz Air Ltd. as a First Officer on the Dash-8.

In their spare time, Heather, her father and brother, rebuilt a wrecked Challenger ultralight on amphibious floats, and spent many lovely summer evenings skimming the surface of the water in the golden light. They took on several gutsy adventures in this small craft, and were rewarded with many new experiences (and a few engine failures). They also flew the Challenger on skis.

After a year and a half of flying at Jazz, Heather decided to leave the airline world in order to indulge other interests. She went back to school and became a Holistic Nutritionist, taught yoga, worked as a carpenter’s assistant, and did some volunteer travel work.

Eventually, however, she found her way back into aviation, and is very excited to be part of the Vintage Wings team, working as the Assistant Chief Pilot.

Robert (Rob) Fleck has a long and extensive career in aviation, accumulating over 12,500 flying hours. He also has enjoyed a fruitful and diverse business career.

His aviation career began in 1976 upon enrolling in the Canadian Forces as a pilot. After graduating with primary pilot training in 1979 Rob’s first operational tour was at 421 Tactical Fighter Squadron at CFB Baden-Sollingen, West Germany flying the CF-104 Star Fighter and T-33 Silver Star. He qualified as a NATO Mass Attach Lead and was responsible for the squadron weapons training and electronic warfare training. In 1983, Rob was selected as initial cadre to form 410 Tactical Fighter Training Squadron when it reformed as the CF-18 “Hornet” Operational Training Unit. He was responsible for Instructing in all disciplines of CF-18 operational flying and penned the official CF-18 “how to fly” manual and the Electronic Warfare (EW) reference manual. Rob also won the prestigious award as Canada’s first Canadian Forces CF-18 “Top Gun” winner.

In 2000, while still engaged in business, Rob became an Air Canada pilot. He took a special leave of absence from Air Canada in 2004 to return to world-wide corporate charter flight operations and returned to Air Canada in 2005.

Again, in 2009, Rob took a second special leave of absence from Air Canada to run Vintage Wings of Canada, a public Charitable Organization responsible for acquiring, refurbishing and flying a unique collection of Canadian aircraft of historical importance. When not behind a desk, Rob flies Vintage Wings “Hawk One” a refurbished F-86 Sabre, as well as the P51D Mustang and North American Harvard.