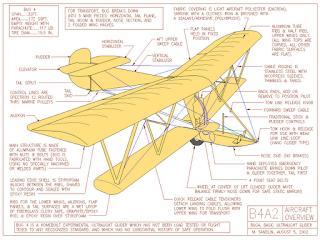 Back in August 2009 I wrote a blog post about free aircraft, that discussed Hubert Beaujon's great idea of giving away free plans for his Beaujon Enduro on the internet.

Well it turns out he isn't the only one doing this. Amateur aircraft designer and builder Mike Sandlin has posted "technical drawings" for five of his Bug, Goat and Pig glider designs on his website and released them to the public domain. Such charity should not go unnoted, so thank you Mike!

His designs are all ultralight gliders that are easy and inexpensive to build. All have flying examples, too, as can be seen on his You Tube channel. Complete descriptions are on Mike's website.

If you only have time to watch one video then have a look at Mike narrating the flight of the "Red Goat" at Torrey Pines, California.

There are now Wikipedia articles about two of Mike's designs that give a good overview:

Yes he gives his designs funny names. I think the Goat is called that because it climbs so well. The Bug stands for "Basic Ultralight Glider" while the Pig is his "Primary Instruction Glider".
Posted by Adam Hunt at 18:36

Do you have any idea of these have ever been flown up here. There was someone in Ottawa building a motorized version of the BUG 5 or 10 years ago, in order to get it into a category. I don't think the glider versions make much sense. Now Sandlin has a motorized version of his own the BLOOP. But as with most things in Canada, it is illegal or impractical to do it up here. A low cost glider is not something you can have up here.

Not sure why you think a powered glider would be illegal in Canada. They could easily be put in the basic ultralight category. Unpowered ones would be hangliders if under 45 kg empty or amateur builts if over that.