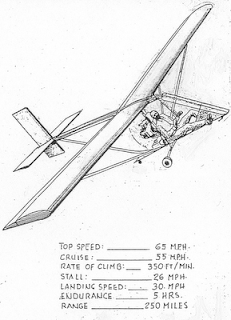 One thing newcomers notice about aviation is that it costs money, generally quite a bit of money. In these days when you can get tons of good quality software for free, there isn't much that is free in the realm of aviation at all.

There are of course some free things in aviation. For instance COPA Flight 8 membership is free. Anyone can come to our nine meetings a year, featuring interesting guest speakers, held in Ottawa, for free. There is a bargain!

AvWeb, the twice-weekly web aviation news magazine is free, too. As anyone who reads it knows it is a great source of aviation news and usually scoops the paper publications on most stories by months. AvWeb is paid for by advertising, but being aviation advertising, even that is of interest to pilots. If you aren't signed up for AvWeb, you should be. After all its free!

This week I found something else in aviation that is free. How about a free aircraft? Well not quite a free aircraft, but free plans to build one, you still have to find your own hardware! Still, these days when aircraft plans cost many hundreds of dollars, free plans are a bargain. So what is the catch?

The free plans are for the Beaujon Enduro, an ultralight that was designed in 1978 by Hubert Beaujon. Beaujon designed a large number of practical ultralights in the 1970s and 80s and he sells seven sets of plans in a book entitled "How to Build Ultralights". The Enduro plans are really a free sample so you will buy his book, although they seem pretty complete. The plans are in the form of 25 JPEGs and a total of 15.3 MB. They are free to use, copy and share for personal and nonprofit use as long as the advertisements for Beaujon's book remain on the pages. People have built and flown Enduros.

So what relevance does this have some 30 years after it was designed? Well it strikes me that while the Briggs and Stratton motor can be found cheaply and, being a four-stroke it does burn only 1 US gal/hr giving an endurance of five hours on five gallons of gasoline, there are some better alternatives. ElectraFlyer offers a really nice electric power package that puts out 18 hp (14 kW). The specified Briggs & Stratton motor, 5 US gallons of fuel and the tank weighs about 120 lbs total. The Electraflyer package with the largest 5.6 kWh battery weighs 104 lbs! This would give about two hours cruise endurance, all for about US$12,500 for the complete powerplant and battery and turn this 1978 design into a true 21st century aircraft. It would be easy to complete the aircraft and get it in the air for under $20,000, not bad for a new aircraft and one in which a "fill up" (recharge) would cost well under a dollar. As a bonus the aircraft flies silently, so no noise complaints!

Okay so the hardware isn't free, but a set of free aircraft plans are a good place to start in aviation, where not much is available for free.
Posted by Adam Hunt at 13:10

Your blog keeps getting better and better! Your older articles are not as good as newer ones you have a lot more creativity and originality now keep it up!

If anyone is wondering why there are so many deleted posts here, it isn't censorship, just removing spamming posts!