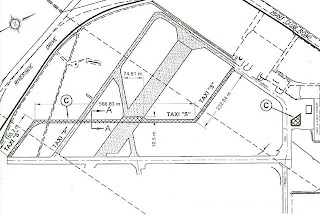 The work includes repairing the existing runway surface and some taxiways, plus creating a new taxiway from the button of runway 04 to the Ottawa Flying Club. Designated taxiway "S", the new route will enable aircraft to use the full length off 04 on take-off without requiring a backtrack.

The repaving work by Tomlinson is expected to take 2-3 weeks and thus should be done by mid-September.