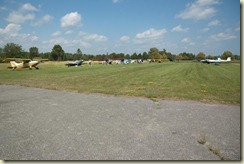 Pilots fly to Morrisburg to show their support. This photo is looking east towards the golf course from the button of Rwy 25 at Morrisburg CNS8.

Over the past year or so, there had been rumours that the St. Lawrence Park’s Commission was planning to close its Airport (CNS8). On 12 July 2011 a group of Eastern Ontario pilots flew into the airport to meet with the Darren Dalgleish, the Commission’s GM and CEO.

Darren Dalgleish is at the head of the table in the photo. 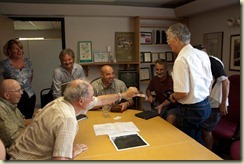 As requested by Patrick Gilligan of COPA, Darren Dalgleish and some of his staff met us at the airport. We then walked over to the Admin building across the road. 9 planes flew in and about 20 pilots from Cornwall, Iroquois, Ottawa, Carp, Bearbrook, Ingleside and Embrun dropped in to show their support. To use the Darren's language, there is no current plan to close the airport, but the Commission must rationalize each asset, and so far see no revenue and fortunately little cost is associated with their airport. The Parks Commission wants the airport to complement their primary activity at Upper Canada Village. Dalgleish noted that the Parks Commission has to ask the Ontario Government to cover its operating short fall each year to the tune of $1.8M. He noted that he has no experience in running an airport and would welcome any suggestions from the flying community.

Various models of management and operation of the small airports were discussed. JD Ross from Iroquois (CNP7) describe how the City of Iroquois manages their airport successfully in a town recreation park using local pilots to manage the airport under an agreement with the city. The Rockcliffe model was described where the Museum owns the land, they have an Airport Commission, and management and operation is by Rockcliffe Flying Club. Capital projects are shared between the Museum and the Flying Club.

The Parks Commission has no idea how much use the airport actually gets. Their primary concern is exposure to risk and liability. Several pilots noted that the CARs put responsibility for the airports they use directly on them, not specifically the airport operator. That said, it was also noted that aerodromes must follow the CARs too. The Ontario Government self-insures the Park. The pilots suggested that the airport ask pilots to sign a book to keep some record of usage.

Pilots talked about how the airport draws them to Upper Canada Village, the Golf course, Restaurant and marina several times a year. In fact, several attendees arrived early enough to lunch at the Golf course. It is this ability and the easy access to Upper Canada Village that makes the airport an attraction for local pilots. Some suggested wider advertising to draw other flying visitors, perhaps even Airport of Entry status for visitors from outside Canada. Pilots pointed to Lamacaza airport near Mount Tremblent as a successful small airport. As well some suggested hangars and a flight school might work to improve revenues from the airport. Several private airport operators present noted  that when the paved runway is no longer useable they switch to grass which is cheaper to maintain. Only the Mooney pilot from Cornwall indicated he preferred asphalt.

Patrick Gilligan suggested that an annual fly-in breakfast associated with a visit to Upper Canada Village could be used to involve the local communities and pilots, and perhaps raise revenues.  This could be arranged by one or more of the local COPA Flights and take advantage of COPA’s insurance.

It was an upbeat productive meeting introducing aviation to the St. Lawrence Parks Commission management and the Park’s Commission to local Pilots. COPA Flight 8 thanks Darren Dalgleish and his staff for inviting us to meet.