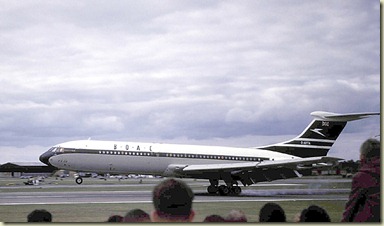 The fact is that compared to other Canadian airports Ottawa has few complaints about noise, averaging about 50 per year. In fact, aircraft movements are up slightly and noise complaints per movement therefore are down slightly.

There have been spikes related to single events, for example in February of this year a Vickers VC10 took off on runway 14 at 03:40 and generated 10 complaints from all quadrants, even Gatineau, Quebec.  This event will see the banning of Stage II noise aircraft during the over night hours. There was a spike in complaints about light aircraft which has since been resolved by the published departure procedures from runway 22 which tends to keep aircraft over farm land rather than residential neighbourhoods.

It is no surprise that First Air’s older B727s generated most complaints, while their B737-200 also gets significant complaints. Surprisingly, Cessna’s generate a significant number of complaints too, one  year Cessna’s had 20 complaints. Unfortunately the airport authority’s statistics do not differentiate between Citations and C150s. It is likely safe to assume these were training flight.

In general, arrivals result in fewer complaints. Currently as part of the Windsor Montreal air space studies, Nav Canada is looking at  separation between arrivals from the west (Toronto) and departures off Runway 25. To do this they may increase the number of arrivals transiting the city along 417 from Kanata to Orleans on downwind for runway 25. The goal is to allow arrivals to descend at idle power from the top of their descent to near final approach. At the same time, departures toward the west may be able to climb unrestricted by the arrival stream. The result of such changes would see more, say 55% of arrivals over Orleans at 4000 feet. Currently about 18% of arrivals over fly Orleans on base leg for runway 25. This will not necessarily be nosier since many will be at idle power until they turn final.

I raised a minor concern that the length of entry in the Canada Flight Supplement (CFS) for Ottawa is getting too long and maybe there could be some thought to reducing it. Examples that I mentioned that lengthen the CFS entries seemed to relate to procedures for the based flight training operations and not itinerant GA pilots. Also, I noted that the item on sand and FOD seemed more appropriate as a Caution rather than a Procedure, especially since the Pro section is used to reflect regulatory sanctions and few other than the military do formation take-offs.

If anyone has any comments or concerns on Noise Abatement Procedures at Ottawa please do not hesitate to pass them along to me and I will bring them to the attention of the committee.

Let’s be part of the solution!

The Cessna causing noise complaints was likely the Caravan that operates from the north field. I once observed it doing a 180 turn low overhead Merivale High School and it made a heck of a racket! Not that I complained, but it really got my attention.

That could be it, but also I believe it is a volume issue related to flight training activities in smaller aircraft, all lumped together as Cessnas.

The training exercises of pilots in small planes is driving me crazy. On a beautiful sunny day like today I would like to be able to enjoy my back yard in Dunrobin. Instead I am subject to non stop circling of planes over head all day long. Could you please remind your pilots to vary thier flight patterns and try to spread it out a little bit more so those on the ground can enjoy or weekends and properties.

I'm not sure training pilots have much chance to vary their training locations significantly. Nav Canada and Transport Canada designate training areas and Dunrobin is within the Ottawa area's. As well Dunrobin is not far from Ottawa's navigation aid, Ottawa VOR (YOW). This too brings both light and larger aircraft to the area of Dunrobin.

I will mention your commments to COPA Flight 8 members, but we are mostly licensed pilots and don't do much training. The flight schools at Ottawa, Carp and Rockcliffe are more likely where you should be directing you comments.

You are welcome to attend COPA Flight 8 Meetings to make your views known to pilots. Our next meeting will be at Rockcliffe Airport on 22 September at 7:30 PM.