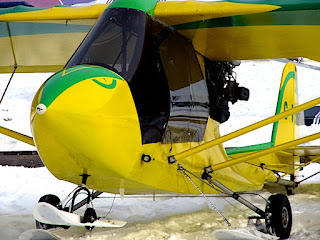 Since 2015 the growth in the private fleet in Canada has been at very low levels. While the 2020 numbers are up from 2019's 0.05% growth, the last five years are far from the peak growth of 2008, just before the Great Recession hit, when the private fleet was growing at a peak annual rate of 3.2%. As the accompanying graph shows, growth rates in the private fleet have been in a fairly consistent decline since the 2008-10 recession started and have not recovered. The graph shows a modest recovery in 2010-11, after the recession, but then drops rapidly and does not reflect the general recovery seen in the Canadian economy. The low Canadian dollar, compared to the US dollar, has probably been a factor and its effect can be seen in the net number of certified aircraft exported.

The global economy crashed in 2020, of course, as COVID-19 swept across the world, but the US dollar remained fairly high against the Canadian dollar. The Canadian dollar ended the year at 78.5 cents US, up just 1.5 cents since the end of 2019. Once again, the low Canadian dollar resulted in a net flow of used certified aircraft out of Canada, mostly to US buyers.

In 2020, the total Canadian civil fleet increased in size by 22 aircraft. Over the year the private segment of the fleet increased by 91 aircraft, while the commercial aircraft fleet decreased by 65 aircraft as air carriers shed airplanes as demand disappeared. The state fleet, those aircraft owned by the various levels of government in Canada, decreased by four aircraft.

Transport Canada reported the addition of one BULA glider, but that has to be a reporting error, as the category is only open to powered aircraft.

Amateur-builts were in the number two growth position again in 2020, increasing by 35 aircraft, a large drop from the 64 aircraft added in 2019, though. In 2020, the aircraft added were made up of 28 airplanes, three helicopters and five amateur-built balloons, minus the loss of one gyroplane.

Amateur-builts now number 4,379 in Canada and include a wide variety of aircraft, from fixed wing airplanes, helicopters, gliders, gyroplanes to balloons and even one ornithopter, although the latter is in a museum.

The O-M category added 19 aircraft in 2020, just two more than in 2019. This makes it the category with the third best growth for 2020, behind basic ultralights and amateur-builts. All the growth this year was in airplanes, with no changes to the number of gliders. By the end of 2020, there were 777 O-M aircraft on the registry, made up of 760 airplanes and 17 gliders.

The O-M category has continued to suffer from low numbers of aircraft being moved from the certified category ever since the American FAA announced that O-M aircraft will never be allowed to fly in US airspace or be sold in the USA.

In 2019 the AULA numbers actually dropped by two aircraft, but this past year they increased by four airplanes, bringing the total number of AULAs on the civil register to 1,256. By its category definition, AULAs are all powered, fixed wing aircraft.

The AULA category was introduced in 1991 and therefore 2020 was its 29th year in existence. The category has increased its numbers at an average of 43 aircraft per year since its inception and so can hardly be considered the success that was anticipated when it was started.

In 2020, the commercial aircraft fleet decreased by 65 aircraft to bring the number down to 7,100. The numbers show a decrease of 41 airplanes and 26 helicopters, with the addition to the fleet of one commercial glider and one balloon.

In round numbers, at the end of 2020 the private fleet made up 80% of the aircraft in Canada, with the commercial fleet at 19% and the state fleet at 1%, all basically unchanged in recent years.

2020 was certainly a year unlike any other in recent memory, although the Canadian private civil aircraft fleet actually had a worse year in 2019 when the economy was doing much better. In the last five years the growth that has been seen in the private fleet has been in the lowest-cost end of the fleet, while many higher-value certified aircraft are being exported. Perhaps the slight rebound this year was due to pilots buying aircraft with the money that they were not able to spend on vacations?