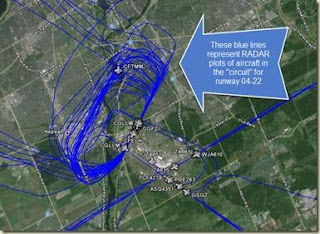 Complaints about airliners change in response to runway closures. When runway 07-25 is closed complaints increase significantly more than if runway 14-32 is closed. This would be expected since the bulk of movements, due to prevailing westerly winds, are toward the west. Aircraft flying the newer Performance Base Navigation (PBN) approach procedures have stimulated zero complaints. This is encouraging for the future as more airliners are so equipped.

The Ottawa Flying Club’s representative, Rod Cross, noted that we all live in the community and we need to respect each other. He noted that the Club is examining the flight paths of training aircraft to see if they can mitigate the negative impacts. The City of Ottawa is very active trying to mitigate unhealthy noise impacts no matter the source. In fact, for new developments in noise sensitive areas notes on titles will be utilized to ensure folks are advised.

There was some discussion of how to deal with training aircraft circuit procedures. For example, it was suggested that raising the altitude of the circuit might stimulate fewer complaints. but there are tradeoffs such as potential conflicts with traffic using runway 07-25. As well longer climbs would mean full power is on longer for each flight, potentially making more noise. Other suggestions were to install newer engines and mufflers on training aircraft, but this would be very expensive and beyond the means of the flight training operators.

The map above shows a radar plot of the “circuit for runway 22”. I don’t know when it was made but it is representative of the path light aircraft fly at Ottawa Int’l airport.