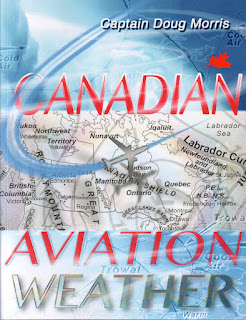 Canadian Aviation Weather is the first aviation textbook that I have been asked to review. Up until now, most of the works sent to COPA for review have been history books or at least books of aviation stories, so this was something new, landing with a 1.03 kg (2.3 lbs) thump on my desk.

My first thought was, "why do we need a new textbook on aviation weather?" The author makes his case, "this book will fill the massive void that existed in Canada regarding a solid up-to-date discourse on meteorology for Canadian pilots." And he really is right in that regard. I mean, despite his homage to the legendary work, Weather Ways, on page 255 of this new book, some things have changed since my copy came out. Like the author, my copy of Weather Ways is marked "third edition, 1961". We now have weather radar, lightning detection, Nav Canada, climate change and a far better understanding of many things meteorological, from volcanoes to space weather. So I agree with the author, that the 21st century calls for a new weather text.

It is hard to argue that there is anyone more qualified to write this book than Doug Morris. Morris is an Air Canada captain on A320s, with more than 21,500 hours in the air. Like most of us, he started on small aircraft and worked his way up in the industry, flying light piston twins on courier flying in Atlantic Canada, yes, right in all that weather they get down east. Being a high-time pilot alone, though, does not qualify one to write weather text books. This is where Morris sets himself apart, as he worked for four years as a weather forecaster for Environment Canada, in a diversity of assignments, including writing east coast aviation forecasts, so he has seen the business from both sides. In fact it was his time as a forecaster that motivated him to learn to fly, something few pilots will be able to fault.

In more recent years Morris has become a writer on meteorology, while carrying on his piloting duties, writing for publications such as Air Canada's enRoute, Wings, Canadian Aviation and Weatherwise. He also gives talks to public audiences on weather, as well as aviation safety topics and gives weather training to new hires at Air Canada, too. Sometimes, when the weather is in the news, he gets the media call to be "an expert weather guru", so you may have seen him on TV as well.

So what is in the book? This is a beginner's book of aviation meteorology, aimed at people on the private pilot course, so Morris starts from the beginning, with a large number of short, sharp chapters, numbering 36 in all, including the three appendices. The topics start with the basics, like the atmosphere, stability and lapse rates, clouds, atmospheric pressure and then work into fog, visibility, air masses, fronts, wind shear, airframe icing, turbulence and thunderstorms, before delving into the reading of METARs, TAFs, GFAs, SIGMETs, AIRMETs, FBs (formerly FDs - wind aloft forecasts). From there the book shifts gears and the author presents a broad look at Canadian regional weather, where to find good met stuff on the internet, reading weather charts and understanding jet streams. He then moves into how ground and airborne weather radar work and how to use both. Next is satellite imaging, dealing with hurricanes and post-tropical storms, how space weather affects circumpolar flying and a chapter on volcanic ash. Yes, he even mentions the April 2010 Icelandic Eyjafjallajökull eruption and the air travel havoc it caused, not to mention the havoc in the news rooms where on-air news readers had to pronounce it. Finally there are appendices on airport identifier codes, RVR and the use of UTC time in weather.

Traditionally aviation weather texts have been, well, a bit dry to read. Most student pilots expect that, after all meteorology is a science subject and there is lots to learn and just plain memorize. Morris seems determined to crack that stereotype and produce a weather book that is actually interesting to read. He accomplishes this mostly with small anecdotes from his own flying career interspersed on almost every page as "sidebars" with their own little "smiling airliner" logo. In these he attempts to relate the book knowledge with occasions when when the lessons were brought home for him, poignant thoughts and minor asides on how the information is relevant and useful. Overall these make the subject much more lively and personal and will probably increase retention for readers as well. There are enough biographical and aviation stories interspersed in the text that by the time you are done you have a feeling that you know the author quite well.

Morris' pure passion for meteorology shines through the text, too. You can tell he has a great deal of enthusiasm for the subject and that can be pleasantly infectious for the reader, making a complex subject more readable and fun. In several places in the book he gets into technical details that are out of the depth required by pilots, which is just his meteorologist side taking over the writing. In many cases he stops himself, indicating that he acknowledges that he is off on a tangent and ends the subject there. I found these places in the book really detract a bit. I don't mind more depth than is needed in aviation meteorology, but it would be better to either pursue that line of inquiry or not put it in at all, rather than start and then quit, but this is a minor quibble on my part.

Like a number of books I have reviewed recently, this book is self-published by the author and printed by Lulu.com. This probably says more about the sad state of book publishing in Canada these days, than anything about the quality of this work. Here we have a well-recognized and highly qualified subject expert, who has written a much-needed textbook, did a good job at it, assembled a good team of expert reviewers, copy editors and even a graphic artist to do the more than 150 diagrams and illustrations, and he has to publish it himself, without further assistance. Canadian publishers and the administrators of the various government publishing support programs in place really need to back up and have a better look at what is being published in Canada these days and why they are not both doing more. That said, the good news is that the book is available from some well-known aviation booksellers in Canada, including VIP.

My criticisms of the book are few. Despite the team of expert and copy editors, a few grammatical errors slipped through. Hopefully these will be cleared up in the second edition. The book lacks the one thing that would be quite useful in a paper book, an index. Again, hopefully a future edition will add this feature.

So who will want to read this book? It is clearly aimed at PPL, CPL and ATPL student pilots, plus those pursuing an instrument rating. It is skewed towards jet airline flying, more than general aviation ops, so the ideal reader would be someone with those aspirations, although student pilots with any flying goals at all will find the book useful and very readable. I have to admit, as an old time pilot with three decades of flying behind me and with more than a dozen civil, military and academic meteorology courses, too, that I learned quite a lot from reading the book. This makes me think that just about every pilot, new and old, should read it, unless you really think you already know everything about meteorology. I would also say that this book would make a good gift for any budding young "met nut", who will learn not only meteorology, but probably catch some of the author's infectious affinity for the subject. This book would also benefit people in other areas of endeavour where understanding the weather is critical, such as sailors, and even all those people we see in many parts of Canada wearing shorts and sandals in January.