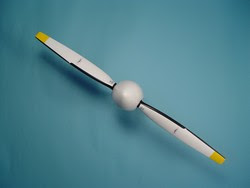 In a recent event, an amateur-built Pipistrel Virus SW experienced a severe vibration while cruising at approximately 1600 feet above ground level. The pilot reduced the engine power and the vibration was reduced. The pilot steered the aircraft towards an abandoned aerodrome, shut down the engine and deployed the ballistic parachute. The aircraft descended to the Aerodrome and landed upright on the wheels. The pilot was uninjured. Shortly after the pilot exited the aircraft, the deployed chute was caught by a gust of wind and the aircraft was pulled inverted to where it came to rest.

The examination of the aircraft revealed that one blade of the propeller, manufactured by Woodcomp, model SR3000, had detached. The remaining propeller blade, hub, and blade root of the detached blade were sent to the TSB Laboratory for further analysis.

The TSB Laboratory determined that fatigue cracks, likely assisted by corrosion, had developed in the bosses of both blade roots of the occurrence propeller. In the root boss of the blade that detached, the crack had caused the separation of the blade.

A similar crack was growing in the remaining root boss but did not cause blade separation because a short segment (about 8%) of the boss circumference still remained unbroken. Fatigue cracking was a result of looseness in the blade root (retainer, bearings, hub assemblies).

Corrosion due to moisture penetration accelerated the growth of the fatigue crack. All 3 bearings that were examined (2) pitch bearings and the detached blade rear bearing exhibited distress of the rolling contact surfaces due to moisture penetration. In addition, the inward race of the rear bearings of both blades was made from a softer material, resulting in its significant deterioration.

The propeller, model SR3000, was acquired new with the aircraft kit. By the time of the present occurrence it was in service for about 11 months and accumulated about 235 hours since new.

All owners are reminded that STD 625, Appendix C, paragraph 6, requires the following:

(a) Fixed pitch wooden propellers shall be checked for tightness after the first 25 hours of air time following their installation and at each subsequent inspection (amended 2007/12/30);