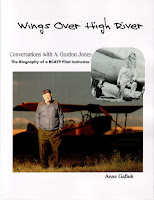 This book, by freelance writer Anne Gafiuk, was an accidental project. She started off writing a story about another World War II pilot when her background research took her to the Bomber Command Museum in Nanton, Alberta. The Museum's Tink Robinson connected her with Gordon Jones, a local pilot who was an instructor with the British Commonwealth Air Training Plan (BCATP) during the Second World War and taught at #5 Elementary Flying Training School in nearby High River, Alberta. In interviewing Jones and his family at their home in High River in southern Alberta, Gafiuk became entranced by his story and the museum convinced her to create the book from her interviews. The museum then published the book in house. Jones was well known at the museum because he owned and flew a deHavilland Tiger Moth, a yellow one in BCATP markings and he displayed it often at the museum.

Gafiuk showed up at the Jones house for her first interview bearing a homemade lemon meringue pie and that won over hearts and minds. She came back, several times, to complete the interviews through 2011-12.

Gordon Jones was born on 12 January 1923 in Bangor, Saskatchewan, the son of Welsh pioneer settlers. Jones' father served in the infantry in the First World War and was gassed in France. He came home with shrapnel wounds. Jones himself lived through the rigours of farm life in the Great Depression and then he enlisted in the RCAF when he turned 18 in 1941. He had to redo the medical three or four times before they took him and he then reported to #2 Manning Depot in Brandon, Manitoba in May 1941. After basic training he was assigned to do guard duty as an Aircraftsman Second Class at #10 Service Flying Training School at Dauphin, Manitoba. He was next sent to #4 Initial Training School in Edmonton, where he flew the Link Trainer simulator.

Jones did his Elementary Flying Training at #5 EFTS in High River, Alberta, on Tiger Moths, where the instructors were civilians at that time. Jones arrived in Fort Macleod and #7 SFTS for his service flying training on Ansons. Billy Bishop himself pinned Jones' wings on and Jones was then promoted to Sergeant pilot. Hoping to be sent overseas, Jones was surprised to be posted to #1 FIS in Trenton for instructor training on 1 January 1942, on Harvards. He says of the 40 or so members of his course who did go overseas, only one made it home.

After instructor training Jones was posted back to #5 EFTS in High River in March, 1942 to teach pilots and was promoted to Pilot Officer and later Flying Officer. It was in High River that Jones met his future wife, Linora Randle, and he says that she taught him how to dance at Alberta country dances. In October 1943 the school converted to Cornells, but Jones never lost his admiration for the Tiger Moth. Jones and Linora Randle were married in October 1944 and it was in that month that the orders came to begin the closure of #5 EFTS as the war wound down. Jones was sent to #1 FIS Trenton and later posted to #16 SFTS in Hagersville, Ontario, where he became a testing officer, taking trainees up for flight tests. No matter how much an instructor wanted to be sent overseas, once you had some seniority in the job you were too valuable as an instructor to go.

After the war Jones went back to farming and stayed in High River the rest of his life. He owned a Piper Cherokee 235, became a member of the International Flying Farmers and a freelance instructor. For a while he owned a flying school and flew charter flights as well, including air ambulance flights. He served on the local airport commission and became the Flying Farmer representative to the COPA board. He was elected to the Municipal District of Foothills five times and became the Reeve. He had kidney cancer in 1973, but overcame it. He later traded his Cherokee for a Piper Lance and then in 1994 bought a real yellow BCATP Tiger Moth when it came up for sale. He kept the Lance as well until 2008, when he was diagnosed with cancer again, beating it again. In 2012 he was given an Award of Merit by COPA President and CEO Kevin Psutka. He kept his Tiger Moth to the end of his life, willing it to the museum.

In many ways this isn't a classic sort of biography of a World War II pilot. Instead this is a sort of a scrap book of interview transcripts, old photos, pages from logbooks, flight test reports, that sort of thing. It's a warm and personal book and has an intimate quality to it. During the long interviews that the author did with Jones and his family, friends and wartime associates she became a part of that family and very close to her subject. The book is full of the little stories and anecdotes that made up wartime service, even here in Canada, far from the fighting, stories of low flying exploits, cross country flights, promotions, train trips and country dances held on remote prairie air bases. Overall it is a delightful read and surprisingly compelling. It is also profusely illustrated with hundreds of photos and documents.

Wings Over High River is an interesting personal story, one that most aviators would find of interest.