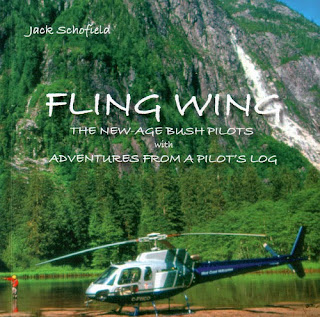 This is a lavish, full-colour work, in a small, square book format, with an emphasis on photographs illustrating selected parts of the history of the Canadian west coast helicopter business. The book follows two approaches to the story. The first 42 pages chronicle a general history in pictures of BC helicopter civil flying, while the balance of the book tells the story of Peter Barratt, the founder of West Coast Helicopters in photos and narrative.

Part one starts at the beginning, with the story of the founding of Okanagan Helicopters by Carl Agar, Barney Bent and Alf Stringer in 1948, starting with a single open cockpit Bell 47-B3. The photos and text follow the company through to its absorption into Craig Dobbin's Canadian Helicopters in 1987. It touches on the founding of Vancouver Island Helicopters in 1955 by Ted and Lynn Henson, including Ted's death in a 1957 helicopter accident. The book also has brief chapters on helicopter maintenance and heli-logging, including its phase-out in recent years for economic reasons.

The second part of the book details episodes from Peter Barratt's 45 year helicopter flying career, from his immigration from the UK as a child, through his time as an RCN Sea King helicopter pilot, to his civil flying career, starting with Okanagan Helicopters on Bell 2006s and S-61s. After he became the Okanagan base manager at Port McNeill, BC, Barratt became involved with the Nimmo Bay resort, a fly-in fishing lodge that he helped construct, hauling loads on the Jet Ranger's hook. He later became an investor in the resort, which allowed him to pursue his other love in life, fishing. Barratt later switched to flying for Highland Helicopters, then back to Okanagan, which became part of the Canadian Helicopters empire and later founded his own company, West Coast Helicopters.

The book's publishing company, Coast Dog Press, represents five different authors who all live on Mayne Island, BC. The company website gives the feeling that it is more of a co-op, as the site explains, "publishing these days is a mugs game, and writers must now market as well as write their books. There are so many people who now deem themselves to be writers that traditional publishers receive about 1000 unsolicited manuscripts per year and rejection slips are flying out there like snowfall on Mount Baker." Coast Dog Press seems to be this group's solution, allowing them an umbrella to do their own writing and marketing. It is worth noting that Fling Wing at least seems to have been published without government assistance, a rarity in Canadian aviation book publishing these days.

Fling Wing is a fun read and certainly will appeal to aviators young or old and also as a good book to share with a non-flyer on a day when the fog socks Tofino in down to the shoreline and the only flying being done is "hangar flying".